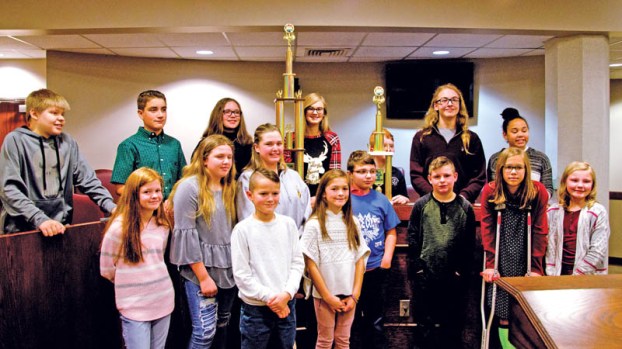 For Hannah McKenzie, of South Point Middle School, the third time was the charm.

She had won her school bee and competed in the annual Lawrence County Spelling Bee twice before, placing in the top four and top five.

But on Wednesday, she took the top spot.

McKenzie is in eighth grade and in her last year of eligibility for the bee, which is open to fourth through eighth grades.

“It feels different,” she said of her win. “After a lot of years of coming close.”

The daughter of Shana McKenzie and Harry Parks, she plays volleyball for her school and takes part in Quiz Bowl and Model UN.

“She’s always a Burlington kid at heart,” her mom said of her.

McKenzie has also competed in the regional spelling bee, which takes place at Ohio University in Athens each spring.

Coming in second place was Sawyer Blackburn, a fifth grader at St. Lawrence School, while Aidryan Spitler, a fourth grader at Dawson-Bryant Elementary came in third.

Sawyer misspelled the word “bungalow,” and was followed by McKenzie, who correctly spelled “cleanser.” She then had to spell “gardenia” correctly to win the bee.

Contestants had to win the bee at their individual schools to compete at the county level. Also taking part were Justin Goodwin and Dean Clark, of Chesapeake, Gracie Vanover, of Dawson-Bryant, Molly Dunlap and Oeryssa Anderson, of Fairland, Lilly Lewis and Dylan Walden, of Ironton, Ava Weber, of Ironton Catholic, Brayzen Williams and Meredith Rogers, of Rock Hill, Serenity Hale, of South Point, and Briar Call and Jaden McCommas, of Symmes Valley.

Top spellers for the schools are eligible to take an online test from Jan. 23-Feb. 6 to qualify for the regional bee, which is set for March 23. The champion at that bee will represent the area at the Scripps National Spelling Bee in Washington, D.C. later in the spring.

Job will be appointed and replace elected secretary-treasurer CHESAPEAKE — The village council of Chesapeake voted on Monday to eliminate... read more