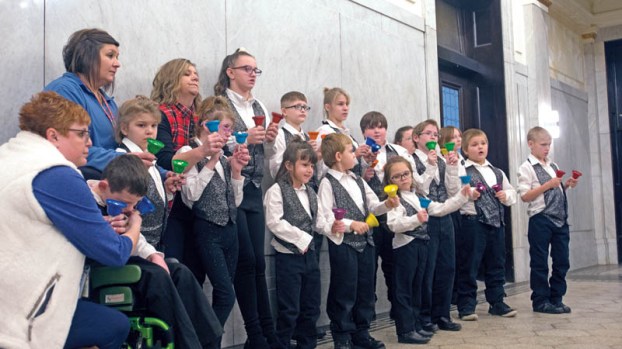 As part of their annual Christmas tradition, 15 elementary students from the Open Door School performed.

If you were at the Lawrence County Courthouse on Tuesday morning, you may have noticed two things. One was that several of the offices were temporarily closed and the sound of bells.

That was because courthouse employees were on the third floor enjoying the sounds of 15 Open Door elementary students performing as a bell choir.

It is a long-standing tradition, since a bell choir from the school has been performing at the courthouse during the Christmas season for several years. Earlier in the day, they performed at the Harbor Health retirement home.

Falecia Collier, an intervention specialist at Open Door School, said this is one of the events where they get to go out and perform in the community.

“They love it,” she said. “They get excited every year when it is time for bell choir. They talked about it all last week.”

Collier said that not only do the kids get to perform in public with their peers, they also learn to work together and follow directions.

“They really do enjoy this,” she said.

Students from kindergarten through sixth grade performed three songs before the highlight for them — a visit from Santa Claus. They crowded around him and hugged him. After that, Santa sat in chair and each child could sit on his lap and tell him what they wanted for Christmas.

They then got a present handed out by Buddy the Elf and Jovi the Elf.

Open Door has a second bell choir made up of middle and high school students. They performed today at Person Centered Services in Coal Grove and at the Ohio University Southern Child Development center in Hanging Rock.

Both groups will also perform at the Open Door Christmas party later this month.

There will be plenty of opportunities to meet Santa Claus this weekend, as several breakfasts and other events are taking... read more