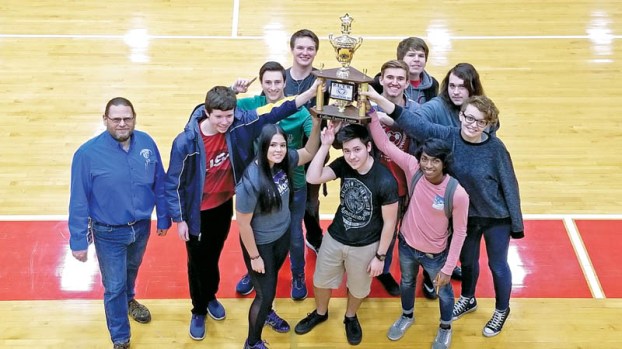 The students, as well as groups from Ironton, Rock Hill and South Point high schools took part in the event, which featured multiple challenges for those in the STEM education engineering program through Collins Career Technical Center.

Monteville said the students involved were seniors and had been with the program since middle school.

“They’ve been with us several years,” Monteville said.

PLTW offers STEM education through all but one of Lawrence County’s school districts, focusing on science, technology, engineering and math. In addition to engineering, the program offers biomedical courses.

Challenges included a math test and a historical chronology challenge, in which students were asked to determine when certain items were invented.

But most featured hands-on activities, problem solving and team work, which are focuses of the program.

Students broke into groups and were asked to build towers from provided materials, such as newspapers and other items that were rated for height and strength, while other groups fired a rocket from an air pump, adjusting for trajectory and the distance the projectile reached was recorded.

Leading into to the competition, each school was asked to build a project with VEX robotics in which an egg was picked up carried for a distance.

“There were people stranded and needing supplies,” he said. “We asked them to build something that could carry supplies across the Ohio River — a distance of 2,000 feet.”

Since they were using a scale in which one inch equaled 40 feet, the projects had to carry the eggs for a distance of 50 inches.

This was the sixth year for the competition, which took place at Rock Hill High, who won last year. Next year’s event is planned for Chesapeake.

“The winning school hosts it the next year,” Monteville said.

On Monday morning, around 100 Minford Middle School eighth graders toured the offices of The Tribune. For most of the... read more