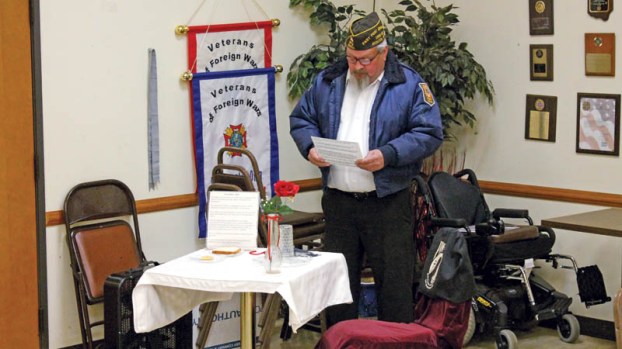 Ironton VFW 8850 Honor Guard Captain Dusty Smith recognizes those prisoners of war/missing in action (POW/MIA) during a Pearl Harbor remembrance service on Monday at the post.

Ironton VFW Post 8850 recognized the anniversary of Pearl Harbor on Monday, with the post’s Honor Guard conducting a service in remembrance.

Honor Guard Captain Dusty Smith began the ceremony by honoring those who were prisoners of war or missing in action (POW/MIA), reading the POW/MIA Table script at a table set for one.

“This table is set for one. It is small and it symbolizes the frailty of one prisoner of war, alone and against his oppressors. The tablecloth is white. It symbolizes the purity of his intentions to respond to his country’s call to arms,” Smith read. “The single red rose displayed in a vase reminds us of his family and loved ones who keep faith while awaiting his return. The red ribbon, tied so prominently on the vase, is reminiscent of the red ribbon worn upon the lapel and breasts of thousands who bear witness to his captivity. It also bears witness to the unyielding determination to demand a proper accounting of all our missing.”

Also on the table was a slice of lemon, which is to remind us of his bitter fate, salt that is symbolic of his family’s tears as they wait for his return, and an inverted glass, because he cannot toast.

“The chair is empty because he is not here with us this night,” Smith read. “Remember all of you who served with him and called him comrade; who depended on his might and aid, and relied upon him. For surely he has not mistaken you. He is commonly called a POW/MIA. I, like you, just call him a brother. He is not able to be with us this evening, so we remember him.”

Smith then read a prayer before the ceremony was taken outside, where the Honor Guard conducted a gun salute and playing of “Taps” in front of the American flag.

Smith, who is an Air Force Veteran, has been the captain of the post’s Honor Guard for around 30 years, and said one of the main reasons he joined the service was because of his father, who was a Marine.

“This means a lot to me because my dad was a World War II vet over in Hiroshima,” Smith said.

“He just passed away this June, but he was over there when they raised the flag. My dad was my hero.”