Hall running off to Shawnee State 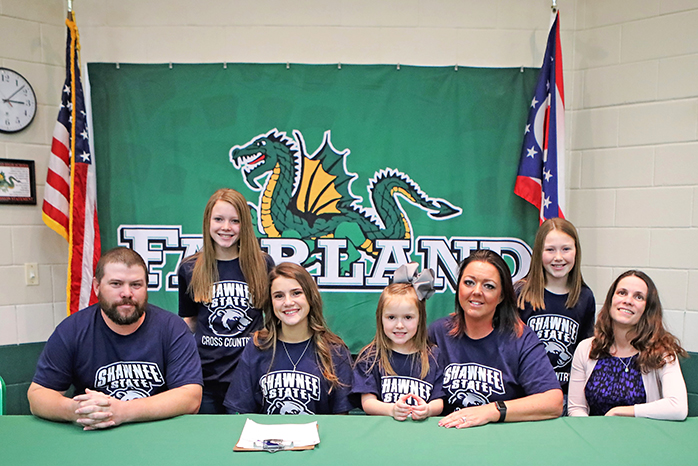 PROCTORVILLE — There are two key people who have helped Deanna Hall during her cross country career, Fairland coach Chuck Wentz and, more than anyone, her mother Crystal.
But Hall also points to some others: everyone she runs against.
Support and competition have been the key elements that have pushed the Fairland Lady Dragons’ senior cross country standout who signed a letter-of-intent with the Shawnee State Golden Bears on Monday.
Hall was No. 53 among 151 runners at the Division II regional meet with a time of 21:07.3.
In the district meet at the University of Rio Grande, Hall was 19th overall out of 117 runners with a 21:25.55 clocking
Fairland won the Ohio Valley Conference meet with Hall placing seventh for all-league honors. She posted a 22:13.57 time on the course held at Ironton High School.
In each meet, Hall improved her time and she said the competition drove her to be better.
“It was the competition pushing me and my training because my coach (Chuck Wentz) was a big help in that. I trained a lot this summer on my own more than I did last year. But mostly the competition pushed me,” said Hall.
But those are mostly nameless faces whom Hall doesn’t know personally, just how fast they run. She didn’t hesitate in noting who was her number one supporter.
“My mom has been my biggest supporter. She comes to all the meets she can. She’s just helped me a lot with my sport. Before I had a car, she would take me to and from practice and to and from the bus. She’s been my biggest support without a doubt,” said Hall.
Hall is just one of more than a dozen runners from Fairland who have signed with Shawnee State and head coach Eric Putnam said Hall will fit in nicely.
“I’ve had my eye on her for years. I’ve wanted her to run at Shawnee since she was young. She fits all those things we look for in a kid,” said Putnam.
“I love what Coach Wentz does with Fairland’s program. They’re not over-trained, they’re not burned out, they’re ready to get better, but they’ve been competitive enough in high school to where we can do something with them immediately. She’s got great grades, we’ve got something she wants to study, it’s just a slam dunk. It’s just a perfect fit.”
Hall knows stepping up to run at the next level will be a daunting challenge but she is ready to take it head-on.
“I’m hoping I fit in right away. I know Conner Flynn on the boys’ team and Jessica Price on the girls’ team. I’m hoping to get faster and upping my training so I can get faster,” said Hall.
“I’m excited. I’m nervous. To compete with a bunch of college runners especially senior in college and I’ll be a freshman in college. But I’m super excited.”
Putnam is confident Hall will make the transition.
“There’s no guarantee that she comes and immediately has some success or has success and does what we plan for her to do, but I have a really good feeling she’s going to be a really good college runner and excel for us,” said Putnam.
Hall chose Shawnee State over Kentucky Christian University and Marietta College.
“Shawnee just gave me that feeling whenever I visited the campus that I was supposed to be there more than the other campuses. I felt more at home there and it has a great atmosphere and it’s not that far from home. I can pop in at home anytime I want or meet everyone in Ashland (Ky.) for a bite to eat or a cup of coffee,” said Hall.
Cross country isn’t the first or only sport Hall has played. She said that she has tried almost every sport but after running track in the seventh grade and then cross country in the eighth grade, she knew she had found her true love.
“And I’ve been running ever since,” said Hall.
“I’ve tried them all except soccer. (Running) just did this thing for me. I felt like I could do anything when I was running. When I was running, I felt like this is what I’m supposed to be doing. I’ve wanted to run in college my entire life. That’s all I’ve talked about,” said Hall who plans to major in Political Science and History in order to pursue a law degree.