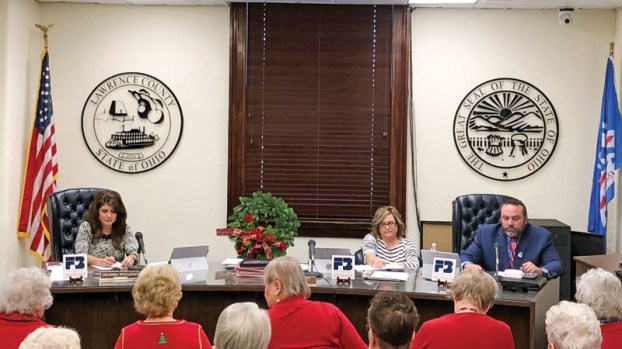 The Lawrence County Commission meeting had a different feel on Tuesday, as family, residents and fellow officeholders mourned the death of Commission President Bill Pratt, who passed away this past Friday at the age of 45.

To begin the meeting, seniors from the Chesapeake-Sybene Senior Center sang a few Christmas carols, including “O Come All Ye Faithful,” “Silent Night” and “Away in a Manger,” before county clerk of courts Mike Patterson spoke about Pratt, gave an opening prayer and led the Pledge of Allegiance.

Commissioner Freddie Hayes Jr. then spoke about his friend and colleague before a video tribute he made was played.

Hayes said that he and Pratt have served on the county commission for seven years together, adding that Pratt was appointed a year before he got on.

“Then we decided we were going to run together,” Hayes said. “I got a trailer and put both of our pictures on it. There were some things that happened and people were telling Bill that it wasn’t a good idea to have his picture up there next to mine. But we talked about it and decided we were going to keep the trailer out, and we were blessed to win and blessed to win ever since.”

Hayes added that though it wasn’t easy the first three or four years on the commission together, because there were a lot of disagreements, the friendship that he and Pratt formed was something special and they complemented each other very well.

“The last six months, I checked on Bill quite a lot. I know he had a lot going on, and we all do and that’s life,” Hayes said. “But he was still smiling every day. Every day, I’d see him, he had a smile on his face.”

Commissioner DeAnna Holliday then spoke before a video tribute she made was played.

“I’ve learned a lot from Bill the past two years I’ve been on the commission,” she said. “He touched the lives of every person in this county, and we will forever be grateful for that.”

County Auditor Jason Stephens then spoke a few words about his friend and fellow officeholder, adding that friendly joking around about Chesapeake often took place at meetings and other events all in good fun.

“I just think about the difference Bill made professionally in this county,” he said. “There are so many things that wouldn’t be in Lawrence County if not for Bill Pratt.”

Stephens said that Proctor’s Landing senior living community in Proctorville, new computers and a finance system in the courthouse, sidewalks in Chesapeake and the paving of Big Branch Road were just a handful of the things that Pratt had a direct effect on making happen.

Burcham said that although he and Pratt didn’t have the same view points on certain things, and were from different political parties, a big connection that the two of them had were that they were both graduates of The Ohio State University and loved the Buckeyes.

Also in attendance at the meeting were Pratt’s wife, Stephanie, and their four children, Rachel, Allie, Natalie and Eli.

Allie Pratt then took a few moments to talk about her father.

“Dad was the kindest and the funniest, and my best friend,” she said. “He probably didn’t think that he would be good at raising girls, but he was the best dad anyone could ever ask for. He was amazing.”

Eli Pratt followed by saying a few words about his father as well.

“He was a great dad. I remember that we would sit down and watch the Ohio State games every Saturday,” he said. “There are just so many great memories. And he was just a great dad.”

Black curtains were also draped outside of the courthouse to signify the county’s mourning.

‘He loved Lawrence County and we loved him’

Bill Pratt remembered for dedication to region CHESAPEAKE— Tributes poured in over the weekend, as officials and locals mourned Lawrence... read more