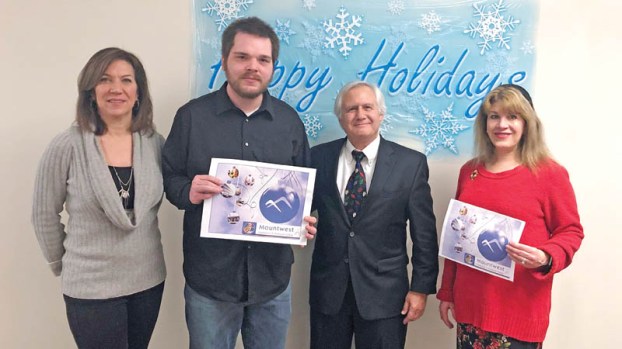 Bird’s winning design features a snowy background, six small ornaments that contain photos of different scenes from the college, as well as a large blue ornament with the MCTC mountain brand marks, and streams of ribbons. At the bottom of the layout is the college logo, and Monty, the Mountwest mascot, wearing a Santa hat.

Bird said he had “played around with Photoshop” on his own since 2005, but didn’t really learn the software until he took classes at Mountwest. “I watched tutorials online and learned to do a few things in Photoshop, but I had no idea of its full capabilities until I took actual classes to learn it.” Web development majors at Mountwest take several design classes to learn Adobe creative software as part of their degree curriculum.

He was surprised and pleased that his design won the Christmas Card contest. “It was definitely one of the more complex and more fulfilling designs I’ve done,” he said.

Bird also received good news a few weeks ago, when he was informed that he had been accepted as one of the 18 students to participate in the inaugural class of NewForce.

NewForce is a training program sponsored by Mountwest, Generation West Virginia and local employer partners to develop workers with the tech sector skills that companies are seeking. Organizers received 180 applications, 40 were selected for interviews, and 18 finalists were chosen.

He said he’s excited about taking part in NewForce, which begins Jan. 14, and continues through July 14. He hopes to land a good paying job with a local technology employer at the conclusion of the training.

Bird is a non-traditional student. He graduated from Cabell Midland High School in 2003 and moved to Florida, where he lived and worked in Miami and Orlando. Five years ago he moved back to Huntington and found a job.

Finally, 15 years after high school graduation, he decided to go to college, and enrolled at Mountwest. Bird has learned technical, coding and design skills and was inducted into Phi Theta Kappa, the world’s largest and most prestigious honor society for two-year college students.

“I was a poor student in high school,” he said. “I didn’t think I was college material.”

He said moving to a different region and struggling on his own without a degree changed his mind about higher education.

In addition, Bird will finish up a few more classes at Mountwest in the spring so he can graduate in May with a two-year degree in Web Development.

Mountwest is accredited by the Higher Learning Commission. For more information about Mountwest, visit www.mctc.edu.

Filling Pratt seat will be decided by county GOP

Following the death of Lawrence County Commission President Bill Pratt, officials will have to name someone to fill the remainder... read more