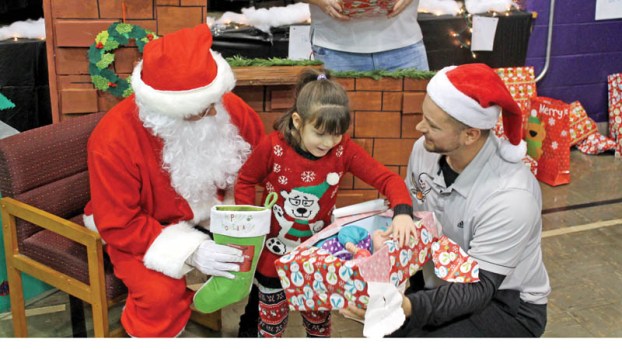 Santa Claus gives Open Door School students a gift and a stocking during the school’s Christmas party on Tuesday. The party was hosted by the River City Buccaneers semi-pro football team.

The students at Open Door School were treated to a Christmas party on Tuesday, thanks to the River City Buccaneers semi-pro football team in Ironton.

This was the second straight year the team put on the party for the students at Open Door.

“My great-grandfather, Bob Payne, volunteered here for almost 20 years, and he just loved the kids,” Michael Payne, owner of the River City Buccaneers, said. “We thought this would be the perfect place to help out our community and give back to these kids.”

Payne, along with players and coaches of the team, provided the students with pizza from Marco’s, and Santa Claus, as well as several other familiar characters, including Marshall from PAW Patrol, Poppy from Trolls, Superman and Captain America, made an appearance for the event.

“We have a lot of great sponsors and donations for this,” Payne said. “And this is the second year in a row we were able to make it happen.”

Students received a winter hat and gloves, as well as a gift from their wish list from Santa Claus. In addition, each also got a stocking filled with different hygiene products and candy.

“This is the second year that the Buccaneers have done this for us and the kids absolutely love it,” Kendra Heim, principal at Open Door School, said. “It makes everyone happy, the staff all love it and it’s just a really good day.”

ROME TOWNSHIP — Children and families attended a brunch with Santa and Mrs. Claus this past Saturday at the Wyngate... read more