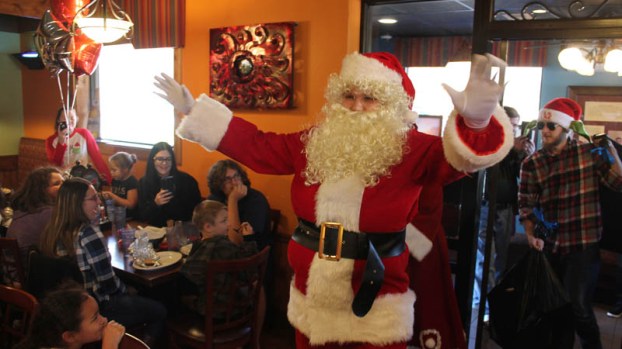 SPHS seniors have been bringing Christmas cheer for 15 years

SOUTH POINT— Twenty students from South Point and Burlington elementary schools were treated to some Christmas cheer a little early this year.

“We were able to raise about $8,000 this year for the project,” Kent Stewart, South Point High School history teacher and project organizer, said. “We have 10 kids from South Point Elementary and 10 kids from Burlington Elementary, who we got from the teachers at the schools. Our students took them to Walmart to get some clothes and things, and then we always take them to lunch at Casa Grande.”

Stewart said the money for the project is collected throughout the year through fundraising and donations, adding that the River Cities United Way, Cindy Chinn from Big Sandy Superstore, and alumni are big supporters of the project.

Stewart also thanked Casa Grande owner Carlos Ortiz for allowing the students to use his restaurant each year.

After lunch, Santa and Mrs. Claus, along with more South Point High School students as Santa’s helpers, showed up at Casa Grande with new shoes and toys from the kids’ wish lists.

“This is my first year being involved with this project as a senior, and it’s really showing me to be grateful for what I have,” South Point High School Student Body President Drake McClure said. “Some kids don’t have anything, and it’s really nice to be able to see them get new things.”

“I’m just happy that we’re able to make this happen for these kids,” she said. “And they get a day out of school to get a chance to enjoy themselves.”