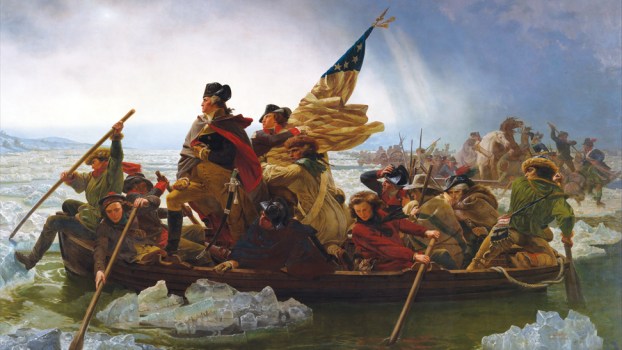 George Washington’s Dec. 25–26, 1776 crossing of the Delaware River during the American Revolution is most famously known, visually, by most people from this 1851 painting by Emmanuel Leutze. However, there are multiple inaccuracies in this depiction, which is wrongly taken as realism by many viewers.

After the British chased George Washington and the Continental Army away from the New York area, the colonial troops retreated across New Jersey looking for a safe encampment.

Thomas Paine, who marched with the army as a volunteer, wrote his Crisis pamphlet by the light of campfires at night on a drumhead.

“These are the times that try men’s souls….” described the bleak condition of Washington’s army.

The army’s numbers were dwindling daily, there was not enough food, many of the soldiers were naked and the men had not been paid.

One week prior to Christmas in the bitter winter of 1776, Washington wrote to his brother, “If every nerve is not strained to recruit the new army with all possible expedition, I think that the game is pretty near up.”

On Dec. 23, at Newtown, Pennsylvania, a few miles from Philadelphia, Washington decided to attack a site in New Jersey. Trenton was a small river port of 100 residences and buildings where 1,500 “Hessians” were stationed under Col. Johann Rahl.

Rahl had been told by Sir William Howe to build redoubts to fortify the town, but ignored any threats from the American “country clowns.” Washington issued the countersign, “Victory or death,” to his officers and men. This military secret signal would be used on the march and during the attack.

Washington’s plan was to transport 2,400 men, 18 guns, and horses across the Delaware River nine miles above Trenton and to attack the town in two columns from the north and west.

Washington devoted the afternoon of Dec. 25 to collecting the 40-foot Durham boats he had ordered hidden on the west bank of the river. Each boat, painted black and pointed at both ends, held 30-40 troops and four or five men were needed to row. The rowing assignment fell to a short, stocky, red-headed fisherman and his brigade from Marblehead, Massachusetts.

Only these Massachusetts fishermen could keep the heavily-loaded boats from capsizing in the swift current laced with jagged cakes of ice. After a march of 12 miles to McKonkey’s Ferry, the crossing point was reached, where the river was 800-900 feet wide.

The crossing began at dusk and was to be completed by midnight. The jagged ice influenced the crossing for nine hours. At 3 a.m. on Dec. 26, 1776, all of his men and equipment were on New Jersey soil. John Glover and his men had gotten them across safely.

There were nine miles to march to Trenton, but Washington feared the element of surprise was lost. It had begun snowing at 11 p.m. on Dec. 25 and the soldiers with broken shoes, rag-wrapped feet, or naked feet left their bloody footprints on the march.

At Trenton, the Hessians and their commander were homesick since it was the Christmas Season back home in Germany. Rahl’s lonely soldiers celebrated Christmas singing carols and drinking too much rum.

Rahl himself visited a local Tory for a festive party. At Abraham Hunt’s home, Rahl was deeply involved playing cards when a messenger delivered a note telling of Washington’s travel routes, army strength, and timetable.

Enjoying the cards and wine, Rahl never read the note tucked in his pocket. In the little rooms of Trenton houses, Christmas trees lighted with candles and hung with ornaments reminded the Hessians of home. This is probably the first time Christmas trees had been seen in America.

Martin Luther, the German Protestant, was probably the first to light up a tree by placing candles on it for his children — “to bring the stars indoors.” One of the first mentions of a decorated Christmas tree in 1605 tells of a tree in Strasbourg that was adorned with roses, apples, gingerbread men and cubes of sugar.

There was to be no smoking, talking, or straggling. With nine miles of marching to get to Trenton, the sleet and snow had rendered many colonial muskets useless and bayonets and artillery would have to carry the day. Only two picket houses manned by Hessians were “on guard.”

At 8 a.m. on Dec. 26, 1776, the Americans reached Trenton in two columns for a simultaneous attack. The Hessians, still drowsy from Christmas celebrations, were surprised.

Rahl raced into the street and tried to form his men. He was shot twice and mortally wounded. He was taken to a nearby church and laid out on a pew.

The raid on Trenton lasted militarily between 30-45 minutes. Within two hours, the forces of Washington had control of all of Trenton. The Americans lost three men in the raid, one of whom froze to death, and six wounded. They captured 1,000 of the enemy and 1,000 stand of arms.

Rahl shook Washington’s hand and begged him to be kind to his men. Washington agreed and prepared to take his men back across the icy Delaware.

The Hessians had been told by their British allies that they would be killed and eaten by the Rebels if they surrendered. On Jan. 1, 1777, the Hessian prisoners were paraded through the streets of Philadelphia. Among the prisoners was a nine-piece band that had often serenaded Rahl.

On July 4, 1777, these Hessian musicians delighted members of the 2nd Continental Congress at the first celebration of the national holiday.

The American army had marched 40 miles through sleet, snow, wind and hail in the last 24 hours and all had gone sleepless.

Due to German Christmas customs, the desire of the enemy to go into winter quarters, and the element of surprise, the Continental Army had won its first major victory of the Revolutionary War. The Second Continental Congress was impressed by Washington’s bold raid and the commander himself happily received many new recruits to begin the year 1777.

THE OTHER SIDE OF THE STORY: Above is a famous painting of “Washington Crossing the Delaware,” painted by Emanuel Leute, a German who never saw the Delaware nor Washington.

This 1851 painting contains some noticeable inaccuracies. The river in the painting was the Rhine, not the Delaware. Washington was Worthington Whittredge, a young American studying in Germany.

If Washington had stood up in the Durham boat, he would have fallen overboard. The flag in the painting had not yet been designed nor thought of in those terms.

The river crossing was made before dawn on a winter night and neither Washington nor his sailors who rowed him would have been visible.

Emanuel Leute’s painting does not reproduce an historical fact, but is taken as realism by many patriotic viewers.