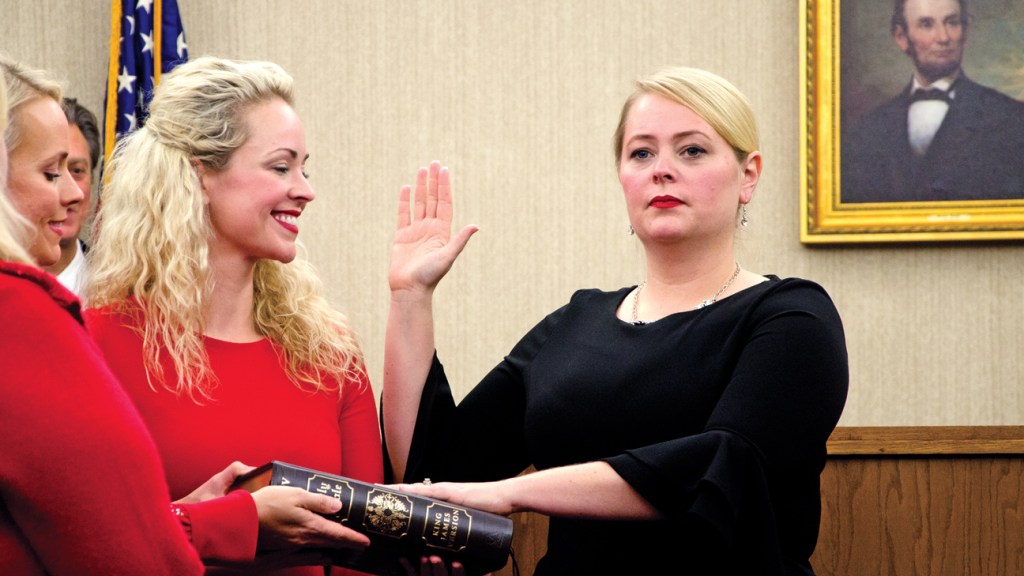 The Tribune/Heath Harrison Lawrence County Common Pleas Judge Christen Finley takes the oath of office on Friday at the county courthouse, as her sisters, from left, Cari Guthrie and Candice Finley hold the Bible. 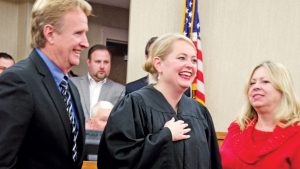 The Tribune/Heath Harrison
New Lawrence County Common Pleas Judge Christen Finley, with her parents, Mike Finley and Connie Finley, tries on her robe after being sworn in at the county courthouse on Friday.

Starts on bench in January

Lawrence County’s new common pleas judge, Christen Finley, starts her job on the bench in January and, on Friday, she gathered with family, friends and supporters in her new courtroom in Ironton to be sworn in.

Finley was administered the oath of office by Ohio Supreme Court Justice Sharon Kennedy, who described the occasion as “the dawn of a new day in Lawrence County.”

Finley, an attorney based in Chesapeake, won the seat being vacated by Judge Charles Cooper, who has reached mandatory retirement age.

A political newcomer, she defeated longtime Lawrence County Municipal Judge Donald Capper for Cooper’s position, in what many considered a surprise upset on election night, becoming the first woman to serve in the position.

“Judge Finley’s accomplishments are a shining example of what any woman in Lawrence County or the United States has the ability to do,” she said.

She pointed out that Finley ran under the message of “Justice without politics.”

“If you think about what that motto embodies, it’s the rule of law,” Kennedy said.

Lawrence County Auditor Jason Stephens spoke before she was sworn in.

“What a pleasure it’s been getting to know you,” he said, recalling when he signed her petition to run for office.

He said she has grown well into the role and expected her to serve the people well for many years.

“I’m excited and proud for that,” Stephens said.

As Kennedy administered the oath, and Finley was fitted for her robe, her family, including her father, Mike Finley, mother, Connie Finley, and sisters, Candice Finley and Cari Guthrie, assisted.

Finley said she was motivated in part to run when she heard of Cooper’s retirement, saw “politics at play” in determining his successor and has athe notion that “the seat belongs to anyone but the people.”

“Someone needs to stand against that,” she said. “And a majority in Lawrence County felt the same way.”

Finley pointed to a quote from U.S. Supreme Court Justice Sandra Day O’Connor, who took office in 1981, the same year she was born, which she included on her program.

“We don’t accomplish anything in this world alone…and whatever happens is the result of the whole tapestry of one’s life and all the weavings of individual threads form one to another that creates something,” it read.

Finley thanked those who turned out for the event and said they were responsible for her victory.

“Each and every person is part of my tapestry, she said. “As I look across this room, I’m overwhelmed with the support I’ve had. I did not achieve this goal alone. Thank you for the opportunity to serve Lawrence County.”