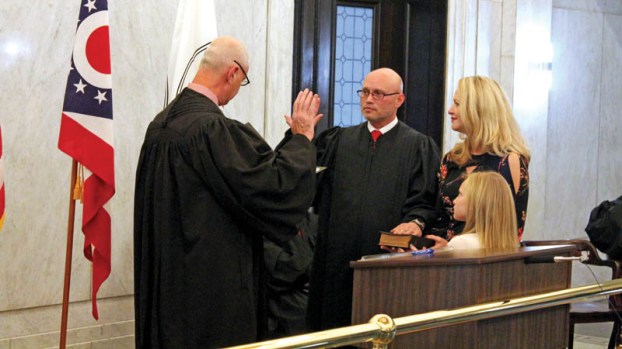 Ironton Municipal Court Judge Kevin Waldo swears in Jason Smith, who was elected 4th District Court of Appeals judge in November, at a swearing in ceremony Friday afternoon at the Lawrence County Courthouse.

3 sworn in for regional offices

Three of the region’s newest officeholders were sworn in at the Lawrence County Courthouse on Friday.

As Republicans swept local races in the general election in November, the party was heavily represented in the crowd for three of its members.

Baldridge, a firefighter and paramedic, said he wanted “to give a big thank you to all the folks across the district who supported me.”

He said he plans on getting to work soon.

“For all I knew, he could have been the pig judge from Adams County,” he said. “It turned out he was the county commissioner. He was easy to talk to and I’m looking forward to his service.”

Baldridge, who was also doing a swearing in for Scioto County an hour later, pointed out that his district only covers a portion of Lawrence County.

“But anywhere we went, talking to folks, everyone was so wonderful and wanted to speak about their community in southern Ohio.”

The event also saw the swearing in of two judges for the 4th District Court of Appeals.

Though a nonpartisan race, Jason Smith, an Ironton attorney, and Mike Hess, an attorney and former Pickaway assistant prosecutor, identify as Republicans.

They were sworn in by Ironton Municipal Judge Kevin Waldo.

Hess said he wanted to thank voters “for the opportunity to serve.”

“They can expect me to uphold the constitution of the United States and Ohio. I hope to be a well-reasoned judge, for equal protection, and to uphold the law,” he said.

Hess defeated Portsmouth attorney Valarie Gerlach for the seat on the court.

Waldo, who is a family member of Smith, became emotional when speaking about him and was moved by the event, describing Smith overcoming personal issues to create “a great recovery story.”

McFarland, of Wheelersburg, has been nominated for a federal judgeship by President Donald Trump. He advised them on the importance of their office.

Of the robes judges wear, he said, “like priests who wear robes, we are sacred guardians of the law as they are texts to their flock.”

Stephens said he had known Smith for a long time, from his time serving as county commissioner, when Smith was an attorney.

“I was always impressed with his intelligence and ability to come through with what the law stated,” he said.

Smith thanked all who were present.

“I’m truly overwhelmed by the crowd,” he said. “Thank you for all who helped me during the campaign,” he said.

Talking about an epidemic