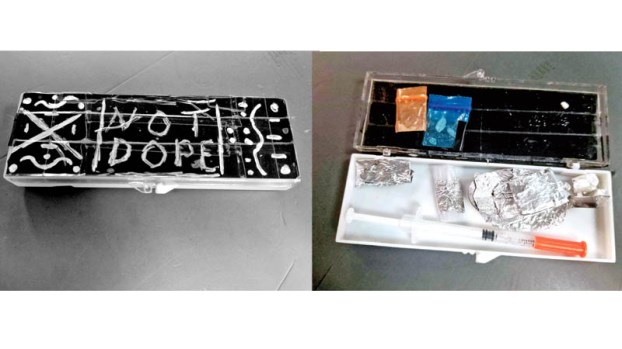 On Wednesday, the Ironton Police Department got a call after an employee at the Briggs Lawrence County Public Library found a box marked “NOT DOPE” that contained a syringe, methamphetamine, tinfoil and a broken spoon.

The Ironton Police Department is investigating a rather interesting box found at the Briggs Lawrence County Public Library on Friday.

The clear plastic hinged box had its top painted black and in scrawling white letters were the words “NOT DOPE.”

However, inside the box was a syringe, several small baggies containing a white substance that the police identified in a Facebook post as methamphetamine, folded tin foil and what looks to be a metal spoon.

“Upon opening the box it was quickly evident that the owner must have confused his boxes,” the IPD wrote on their Facebook page. “At face value, this post may seem funny, but in all seriousness, can you imagine what could have happened had a child discovered this innocuous looking box?”

IPD detective Capt. Joe Ross said that a library employee found the box and called the IPD to ask what to do with it. Ross said he sent a police officer over to safely secure the box.

The police department is working to identify the owner of the plastic box.