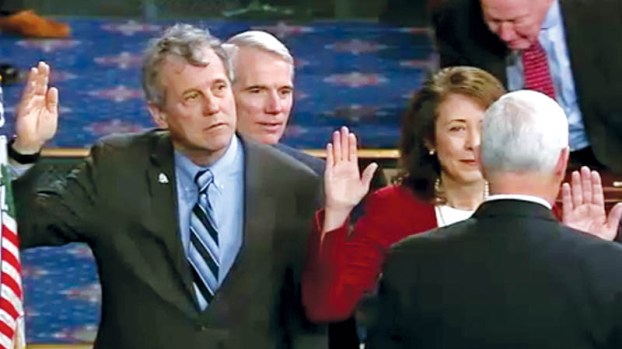 U.S. Sen. Sherrod Brown, D-Ohio, left is sworn in with other senators who won terms in 2018. Ohio’s junior senator, Republican Rob Portman, second left, escorted Brown to the floor for the oath of office.

WASHINGTON, D.C. — U.S. Sen. Sherrod Brown, D-Ohio, was sworn in for his third term in the chamber on Thursday.

Brown was escorted to the floor, where Vice President Mike Pence administered the oath, by the state’s junior senator, Republican Rob Portman. Brown was joined by his wife, Connie Schultz, and their family.

Brown, who was first elected in 2006, defeated Republican U.S. Rep. Jim Renacci in November’s general election. He is the fourth U.S. Senator in the state’s history to be popularly elected to a third term.

Viewed as a working class advocate from a swing state, Brown has been touted by many analysts as a potential Democratic nominee for president in 2020. He said last month that he is weighing a presidential bid and well decide in the coming months.

He was one of the names on the short list for Hillary Clinton when picking a running mate in 2016, though that nomination went to U.S. Sen. Tim Kaine of Virginia.

Brown said the first order of business in the Senate must be to reopen the government and again called on President Donald Trump to end the government shutdown.

“I am grateful to the people of Ohio for giving me the opportunity to serve them, and I look forward to continuing our fight together to uplift the dignity of work and stand up for all workers,” Brown said in a news release. “We need to start by reopening the government and getting thousands of workers in Ohio and across the country back on the job, and I’m calling on  President Trump to end his shut down immediately. Then we need to work together to solve the pension crisis, lower healthcare costs and raise wages for all workers.”