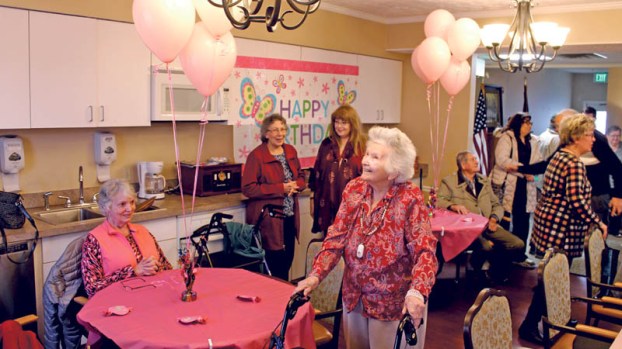 RUSSELL — Dorene Simpkins, a resident at Morning Pointe, turns 103 today, and on Thursday, family and friends gathered at the assisted living community to celebrate her birthday.

“She was a resident of West Virginia most of her life. She was born and raised in Wayne County, West Virginia, and spent most of her adult life in Huntington,” Marilyn Ardisson, Simpkins’ youngest daughter who was in from Fort Knox, Tennessee, said. “She’s a retired teacher who taught fourth grade in Wayne and then in Lavalette the last 12 years before she retired.”

Ardisson added that some of the other things her mother liked to do when she was able included painting, which she has several of her pieces hanging in her apartment at the facility, senior citizens clubs and raising and spending time with her children.

Simpkins was born and raised on a farm, and kept her farm traditions when she raised her own family, Ardisson said, adding that she believes that has something to do with the longevity her mother is able to have.

“She didn’t eat much meat,” Ardisson said. “And she didn’t drink or smoke.”

Those in attendance on Thursday included Addison and her husband, her son, David, a few of her siblings and their spouses and friends that are in the area.

Simpkins also credited her longevity to a healthy lifestyle, as well as her faith in God.

“I always ate well, and never drank or smoked or anything that would do damage to my health,” she said. “And I trust in the Lord and just let things happen. Whatever will be will be.”

Simpkins has lived at Morning Pointe for around two and a half years, and has three children, one deceased, five grandchildren and nine great-grandchildren.

A retrospective collection of 23 original paintings by artist Diane Smallwood is currently on display at the Briggs Lawrence County... read more