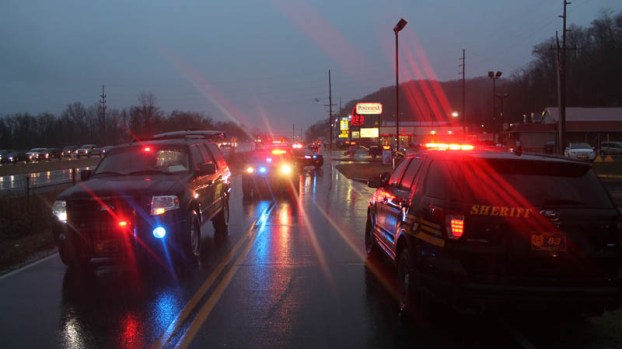 Law enforcement had the area of a shooting outside of the South Point McDonald's blocked off Wednesday afternoon. The suspect is currently being sought for murder after the victim died at the hospital for multiple gunshot wounds.

A warrant for murder, a felony of the first-degree, has been issued for the arrest of Belinda S. Adkins, 41, of 143 Township Road 279E, South Point. The suspect is being sought in connection with the shooting death of Mr. Jones that occurred in the South Point McDonald’s parking lot Wednesday afternoon.

Adkins fled the scene immediately following the shooting in what Lawrence County Sheriff’s detectives discovered was a 2008 white Chevy Malibu. The suspect has not yet been apprehended, and law enforcement officers from around the Tri-State have searched numerous areas and are continuing to follow up on all leads.

The investigation has shown that both subjects had planned to meet at the South Point McDonald’s parking lot, located at 295 County Road 406, South Point, with Mr. Jones assuming Adkins would exchange their daughter, whom he was to assume custody of. Adkins did not bring their daughter with her, and instead left the daughter with relatives.

Adkins is a white female, 5’4″ tall and weighs about 175 lbs. with black hair and blue eyes.

Anyone with information on the whereabouts of Belinda Adkins is urged to contact the Lawrence County Sheriff’s Office at 740-532-3525.

Public forum set for Jan. 31 at OUS There will be three committee meetings before the regular Ironton City Council... read more