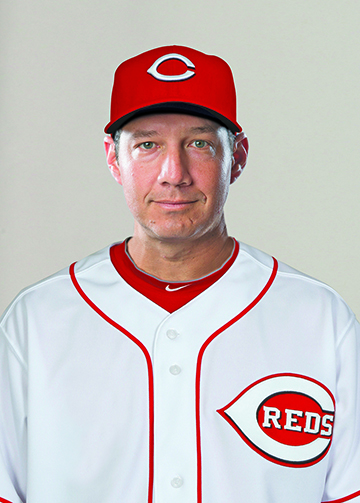 COACHING CAREER: Rolando Valles is in his first season in the organization…on 1/24/19 was named associate coach on new manager David Bell’s Major League staff…before joining the Reds spent 11 seasons in the player development system of the Brewers…joined that organization in 2008 and for 9 years served as Milwaukee’s minor league liaison to Latino players…in that role, he assisted with the off-field needs and development of the Brewers’ non-English speaking players…was pitching coach for the rookie Arizona League Brewers from 2010-2013 and again in 2016 and pitching coach for Helena in the Pioneer League from 2014-2015 and 2017-2018.
PLAYING CAREER: Before joining the Brewers’ player development department pitched for 10 seasons in the minor leagues and independent leagues…in April 1997 was signed by the Astros as a non-drafted free agent…after 5 years in Houston’s system, played in independent leagues with the Amarillo Dillas (2002-2003) and New Haven County Cutters (2005-2007)…in 2007 served as New Haven County’s player/pitching coach.
PERSONAL: The native of Venezuela lives in the Phoenix suburb of Litchfield Park with wife Angelica and children Rolando and Claudia.
— Rob Butcher, Reds’ media