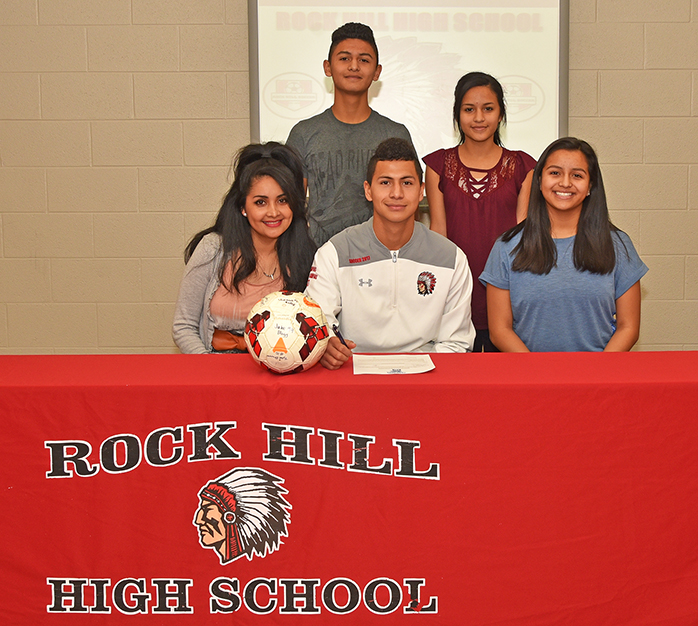 PEDRO — Victor Aguilera is a man about sports.
The Rock Hill Redmen senior runs cross country as well as track, and this past season he did some kicking for the football team.
But his main sport is soccer and that’s were he heart lies. And so does his future after signing a letter-of-intent on Friday with the Shawnee State Bears.
“I run cross country and track so you get speed from there. It helps out. I kicked some for football. It’s different. I had to much fun in football,” said Aguilera.
But soccer is the sport Aguilera has played since kindergarten growing up in Honduras.
“I’ve been around soccer all my life. I love playing soccer,” said Aguilera who moved to the United States in 2011.
It shows.
Aguilera scored 110 career goals in less than three full seasons.
“He’s just been amazing. 110 goals in three years is pretty incredible,” said Rock Hill coach Luke Simpson.
“More than that, he’s just a great leader and a great teammate. He has great skills. He led us to back-to-back OVC championships. He’s just an incredible athlete.”
Aguilera gave credit to his teammates for his individual achievements.
“It was all about the team. It was about teamwork. Without them I wouldn’t have been able to accomplish that,” said Aguilera.
“It was tough. My senior year I started out with an injury and kept me from playing the first six games. I managed to come back and score 29 goals. That was great. I give God the glory. He deserves it.”
Shawnee State assistant coach Mark Trapp said Aguilera is one of the jewels in what he terms the program’s best recruiting class.
“He’s a great student, a great athlete. We’re really lucky to get him. When you look at the whole realm of a student-athlete he gets it. He works hard in the classroom and he works hard on the field,” said Trapp. “He’s going to be nothing but an asset to our program.
Trapp expects Aguilera to be part of the starting lineup as a freshman.
“He’ll be at the right forward. His skill level he’s good to go. He can step in and play immediately,” said Trapp.
Aguilera is glad he’ll get to play forward for the Bears.
“Most of my life I’ve play offense. I’ve trying playing defense, but it’s not really my key position. I love playing as a forward. Scoring is my thing,” said Aguilera.
Although Aguilera is ready to focus on soccer, he toyed with the idea of playing football, too. But he was happy with his choice to play at Shawnee State.
“I didn’t talk to any teams where they offered me both, but I thought about it. I thought about kicking for a football team,” said Aguilera
“I think Shawnee is perfect. I’m close to home and it’s a nice little school. I know some people there and I feel comfortable. It’s pretty much about feeling comfortable over anything and just playing the sport that I love.”
Of course, Aguilera will place plenty of focus on his education.
“I want to get my exercise science degree and in my later years join the Air Force as an officer. I want to educate people about fitness,” said Aguilera.

FOXBOROUGH, Mass. (AP) — Seventeen years ago, Tom Brady was 24 years old and in his second NFL season when... read more