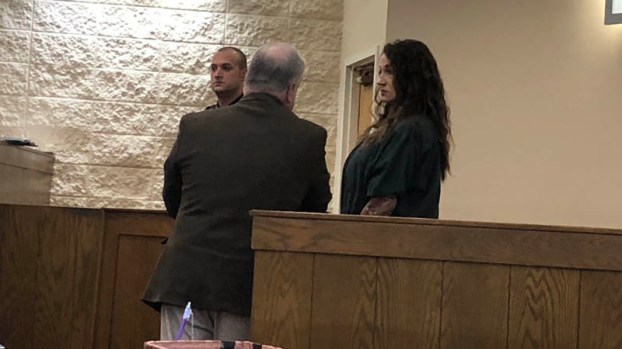 Belinda S. Adkins, 41, suspect in a shooting outside of the South Point McDonald's last Wednesday, pleaded not guilty to murder in Lawrence County Municipal Court on Monday. She is seen here with her attorney, Roger Smith.

CHESAPEAKE— Belinda S. Adkins, the suspect in a shooting outside of the South Point McDonald’s last Wednesday, which turned to murder after the victim later died at a hospital from multiple gunshot wounds, appeared in Lawrence County Municipal Court on Monday for her arraignment.

Adkins, 41, of 143 Township Road 279E, South Point, pleaded not guilty to murder, a first-degree felony, in front of Judge Donald Capper. The proceedings took less than five minutes in front of a packed courtroom.

The state recommended bond at $1 million cash or surety, which was granted by the court. Adkins is represented by attorney Roger Smith.

The case began around 4:30 p.m. on Wednesday, Jan. 23, when the Lawrence County Sheriff’s Office responded to the shooting outside of the McDonald’s restaurant, located at 294 County Road 406 in South Point, also known as the Sandusky Road McDonald’s. Upon arrival, deputies discovered a male, later identified as Joshua C. Jones, on the ground outside of a vehicle with multiple gunshot wounds. Witnesses of the situation notified authorities that they saw a woman flee the scene in a white sedan immediately after the shooting.

Sheriff Jeff Lawless said that the shooting was an isolated, domestic violence-related incident.

The suspect was identified as Adkins, who law enforcement spent nearly the next two days searching for. The vehicle she fled the scene with, a white 2008 Chevy Malibu, was discovered in Ironton last Thursday, and Adkins then turned herself into the Lawrence County Sheriff’s Office this past Friday and was arrested in Burlington.

Workers picket in Ashland regarding costs of federal furloughs WASHINGTON — Leaders in the nation’s capital announced a deal on... read more