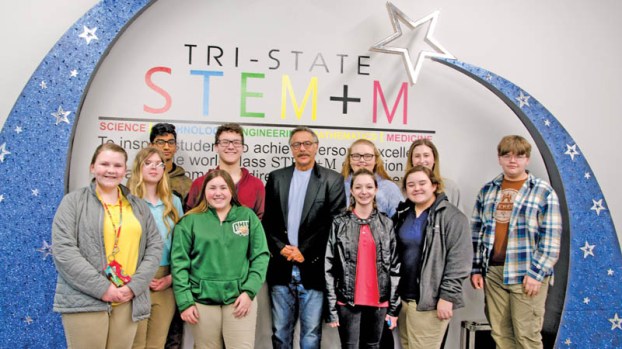 Gary Robinson, who had worked as an educator and administrator for decades, is the new director of the Tri-State STEM+M Early College High School and has been on the job since early this month.

“They’re the future leaders of America,” he said. “These are people who will make a difference in society.

Robinson began his position as director of the school in early January, following a wide search for a successor to founding director Jayshree Shah, who left in the fall.

“I was one of the top two,” he said of the process, which culminated in his hire.

Robinson said he made it a point to come in during December to introduce himself to the students and faculty and that he got to working early.

“As soon as they told me I had a job, I said ‘I have to get in here’” he said, adding that he wanted to assure those at the school that they had a new administrator before Christmas and end any uncertainty.

Robinson, who lives in Russell, Kentucky, describes himself as ‘an Appalachian boy,” growing up in Scioto County and living in Portsmouth, Wheelersburg and Sciotoville.

Prior to taking the position in South Point, he was working in Chillicothe.

“I said ‘those are my people here,’” he said of hearing of the opening in Lawrence County. “I know how they think.”

Robinson said he considers it a blessing that he attended Shawnee State University, where he was in the first generation in his family to go to college.

“Without them, I would not have been catapulted into this,” he said of his career path.

He said he initially went to school for computer programming, but one day, he walked into the wrong room, where a biology class for specialized medicine and athletic training was taking place.

“That really hit me,” he said, noting that he had a background in athletics, having run triathlons.

He then worked with an athletic trainer who was an assistant trainer for the Washington Redskins.

He went on to get his bachelor’s from Ohio University, studying education and biology, followed by a master’s degree from Morehead State University.

His career began with working as an applied physics instructor for 15 years at the Scioto County Joint Vocational School.

But he said he wanted to work with more than just small classes.

He then began looking into education administration, where he said he could shape the future of hundreds and thousands.

“I saw an opportunity to change things for the better,” he said.

Ross worked as a director for six years at the Pike County Career Center, followed by his time in Chillicothe, where he was dean of students at the Pickaway-Ross Career Tech Center.

He said he was at the 30-year mark in his career and “was still hungry and wanted to work with kids.”

That’s when the position at Tri-State STEM+M presented itself.

He said he had been present at the school five days a week, before officially starting, wanting to alleviate any pressures students and staff may have felt.

He said he hopes to grow the school, which has a staff of seven and about 70 students enrolled.

He said he is interested in STEAM education, in which the “A” represents arts, hoping to expand course and program offerings. “It would be a perfect scenario, giving them something more than a desk and a book,” he said.

He also is planning a big promotional push to get the school’s name into the public, throughout the Tri-State.

“The kids here are different,” he said. “They’re very motivated and goal oriented.”

He points out that the school has no bells between classes.

“They just get up and know what to do.

And they forgo desks, with students working throughout the building in groups and on laptops.

He said he has been impressed by the staff.

“They are very dedicated,” he said. “And so is our board. And we have so much community support.”

Robinson’s wife, Susan Beth, works as vice president of human resources and
corporate compliance for St. Mary’s Medical Center and Cabell-Huntington Hospital, giving him a contact in the medical community.

The couple has five children, who Robinson said are grown and live “all over the country.”

He said one of his top goals is to increase enrollment and available classes, as well securing more equipment, such as 3-D printers, robotics and drones for the engineering program and medical equipment. He said the school will see its first graduates this year.

As for future events, Robinson said they will be hosting monthly informational sessions for prospective students and their families, and the school will host its annual international gala in April, a major fundraising dinner.

“We’re hoping to expand that this year,” he said.

He said the key to the school’s future will be taking advantage of local resources, working with local colleges and the major businesses and industries in the region, many of which he is already in contact with.

“We have some major players on our side,” Robinson said.

Longest in U.S. history; Had been going on since Dec. 22 WASHINGTON — Members of Ohio’s delegation to Congress reacted... read more