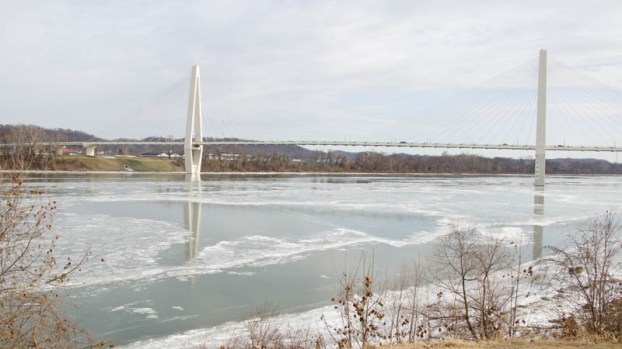 A view of the Ironton-Russell Bridge from January 2018 when temperatures were extremely cold. Temps are expected to be the same way the next few days due to a polar vortex.

A polar vortex expected to bring some of the coldest weather to this area over the next few days.

The National Weather Service is expecting high winds today with temperatures becoming “brutally cold” through Thursday night. The high temperature today will be 16 degrees with a low of -2 degrees overnight. Thursday will have a high of 22 degrees and a low of 15 degrees.

Light snow is expected on Friday with a high of 34 degrees and the temperatures will rise to mild levels over the weekend.

Columbia Gas is reporting that the company is expecting natural gas usage today to be 75 percent higher than a typical January day and that usage may approach the all-time record set in January 1994.

The company has crews monitoring regulator stations around the state and service crews are ready to respond in case of an emergency.

American Electric Power recommends using extreme care when using a space heater. It should be placed at least three feet away from anything that can burn including walls. Unplug it before leaving the room. Do not use a stove to heat the house.

The company also recommends guarding against carbon monoxide poisoning by making sure that smoke alarms and carbon monoxide detectors have fresh batteries and are working properly.

One of the most costly things to repair after a cold snap is a broken water pipe in a house.

“During the cold winter months, we receive many insurance claims from homeowners and renters who fall victim to frozen pipes,” says Mark Sisson, vice president of insurance for AAA East Central. “All pipes, whether plastic or copper, can burst, and even a small crack can spew hundreds of gallons of water per day. That can lead to some very expensive damage.”

Some tips for preventing frozen pipes include:

• Make sure everyone in your family knows where the water shut-off valve is, and how it works.

• When a freeze is expected, consider allowing warm water to drip slightly overnight, preferably from a faucet on an outside wall. Even a slight trickle may keep your pipes from freezing.

• When there is the possibility of a freeze, don’t turn down the thermostat at bedtime, and instead maintain the same setting day and night. Drops in temperature, which are more common overnight, could freeze your pipes.

• Insulate pipes in your home’s crawl spaces and attic, even if you live in an area where freezing temperatures are unlikely.

• Seal leaks around pipes that allow cold air inside. You also should look for air leaks around electrical wiring, clothes dryer vents and pipes. Use caulk or insulation to keep the cold out.

• If your water pipes have already burst, turn off the water at the main shutoff valve in the house, leave the water faucets turned on, and call a plumber.

If its cold enough that humans don’t want to go outside, it is too cold for animals too.
Cats should be kept inside during cold weather and dogs should only be let outside to use the bathroom.

The ASPCA suggests putting petroleum jelly or other paw protectants into paw pads before going outside can help protect from salt and chemical agents.

Bring a towel on long walks to clean off irritated paws. After each walk, wash and dry your pet’s feet and stomach to remove ice, salt and chemicals — and check for cracks in paw pads or redness between the toes.

And the ASPCA stresses that if it’s too cold for you, it’s probably too cold for your pet, so keep your animals inside. If left outdoors, pets can freeze, become disoriented, lost, stolen, injured or killed.

In addition, don’t leave pets alone in a car during cold weather, as cars can act as refrigerators that hold in the cold and cause animals to freeze to death.

Video being reviewed to ID drug buyers PROCTORVILLE — The Proctorville Police Department made a drug bust at a gas... read more