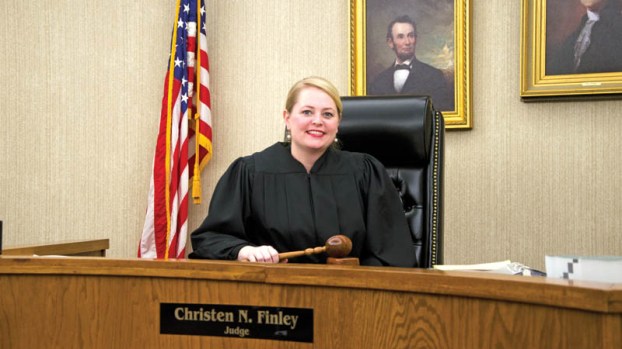 Lawrence County Common Pleas Judge Christen Finley has been serving on the job since Jan. 2.

“I think it’s going pretty well,” she said. “It’s a really heavy criminal docket and it keeps us busy.”

Finley said she has not been keeping regular hours for the position, putting in extra time to familiarize herself with its working.

“Any new job has a learning curve,” she said. “And maybe I’ve been overcautious, but I’ve been going over all the rules and pulling the statutes because I want to be sure I get everything right.”

Finley, who was elected to the position in November, is the wife of Jason Leonard, the daughter of Mike and Connie Finley and grew up in Burlington.

“I went to South Point and Chesapeake for school and graduated from Chesapeake,” she said.

From there, she went to Marshall University, where she got a degree in economics, followed by Capital University Law School in Columbus.

While enrolled there, she clerked at the Franklin County Public Defender’s office, followed by work at a Columbus law firm.

She took the bar exam in 2005 and moved back to Lawrence County, working for McCown & Fisher in Ironton for a few months, before having to move back to Columbus, where she worked for Ernst & Young for a few years.

“Like a lot of people around our area with student loans, I couldn’t afford to stay here,” she said. “I looked for a firm that could provide me with income to support myself.”

When she decided she wanted to move home again, she said she took a position with the law firm of Richard M. Lewis in Jackson in 2009, where she stayed through her election last year.

Running on a campaign of “Justice Without Politics,” Finley said “the role of a judge is to apply the law as written.”

She said there have been no major surprises for her since being sworn in, and, as of now she has made only small procedural changes to the office from her predecessor

She said her first weeks on the job have deepened her concern on some issues.

“Some of things I felt strongly about, I feel more strongly about now,” she said, citing overcrowding at the county’s jail and the need for a new facility. “The jail is one of those.”

One of the issues facing the area is the opioid epidemic, which Finley said could be addressed with specialized dockets for the court, such as a drug court, similar to the one Judge Andrew Ballard operates in the county’s other Common Pleas position.

“It may happen in my first year, but it’s something that will happen after I get acclimated,” she said of her plans.

She said she has also been speaking with people from the Veterans Administration about the possibility of also creating a veterans court for the county.

“For qualifying and eligible cases,” she said. “Most special dockets typically center around substance abuse and mental health issues.”

In the meantime, she said there is the option of the ILC program, which she describes as “treatment in lieu.”

“We can do that with certain offenders, depending on whether they have a criminal history or qualify,” she said. “Some I can do on my own, some with the prosecutor’s office.”

Finley said, if a motion is filed for it, the court orders an evaluation.

“The defendant brings back the evaluation and a proposed program,” she said. It’s supposed to last 12 months and, if they successfully complete it, we can seal their record for them.”

Finley’s victory in the race, against the longtime judge, was viewed by many as an upset and she said on election night that she was surprised by her win.

She said she credits support from throughout the community for her election.

As a founder of People for the Point, a board member of Special Need Youth Sportsmen, a vice president of Habitat for Humanity and as a Sunday School teacher at C3 Church, she was already a familiar face to many.

“I’ve been really involved in the community in general, and it wasn’t like, ‘Oh, she’s only coming to this event for the first time because she’s campaigning,” she said.

Evidence of that support is present in Finley’s courtroom. The gavel she uses as judge was sculpted by Ray McFarlin, whom she met when attending an event for the El Hasa Shriners in Ironton.

She said she later saw McFarlin at the Lawrence County Fair, where he was creating a new woodworking piece. It was only later that she learned it was intended for her.

Finley also said she was familiar with political campaigning, having worked the polls for both her father’s campaigns for Fayette Township Trustee and for the late Lawrence County  Commissioner Bill Pratt. She said she called on her extended family from throughout the county for help with the campaign and that she focused heavily on face-to-face meetings with voters through door.

She said she is grateful for the backing she saw and hopes it is due to her record.

“Truly, I am still dumfounded,” she said of the support. “I think that people saw I truly had a sincere pass for Lawrence County. I have done a lot of work for lot of people throughout county as an attorney and I think, when you treat people right, word of mouth spreads.”