Malone to continue fun of bowling at Shawnee State 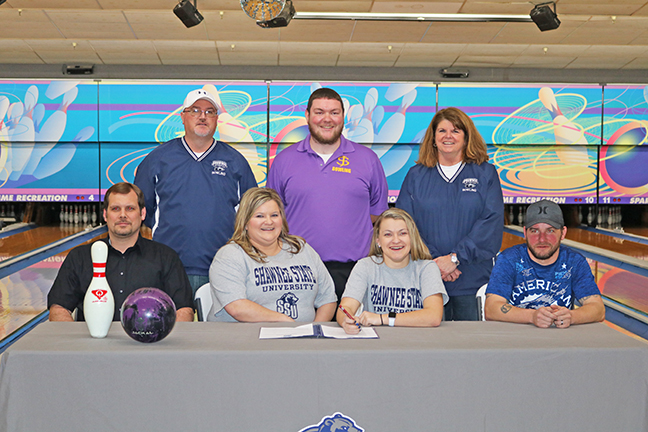 It has been said that life is not all fun and games.
You might not have a very good chance of convincing Kelsey Malone about that.
The St. Joseph Lady Flyers senior seems to find fun in everything she does, and she does a lot. And when she started having fun with bowling, she didn’t realize the opportunity that was about to fall on her.
“I started my sophomore year just for fun because they were short a bowler. I just did it to have enough for a team because they only had four and you need five to actually compete. I wasn’t doing anything in the winter,” said Malone.
Malone bowled well and by her junior year she became the first local female bowler to qualify for the district tournament. He game has continued to improve and that created an unforeseen opportunity.
Shawnee State University head coach Bryan Sturgell — the program’s only coach in a brief two-year history — said he couldn’t help but like what he saw and heard when he first came into contact with Malone.
“We came up here for a couple of high school events and the coach introduced her to us. We just liked the way she threw the ball. We kind of just liked the way she was as a kid. She’s positive, a hard-worker and we’re building a young program,” said Sturgell.
“We’re just excited to give some local kids an opportunity. She’ll fit right in with our team right out of the bat. She’s excited, we’re excited, so that’s good. We just like to have fun and she seems like she likes to have fun, so it’ll be a good mix for us.”
Malone parlayed fun and education on Thursday when she signed a letter-of-intent to bowl for the Shawnee State Bears.
Signing to bowl in college still seems a bit of a dream to Malone.
“If you had told me then that I would be signing to play at Shawnee next year I would have laughed at you because I never thought that I would,” said Malone.
“But this year, whenever I had the chance to talk to Bryan (Sturgell) about it, I was ‘yeah, I want to do it because I really started liking it a lot last year.’ It became super fun and I just love doing it. I love to bowl so I said I’m going to do it because I don’t want to give it up yet.”
Besides bowling, Malone plays volleyball and softball. She even played some basketball last season when the team was in need of some extra players due to injuries.
In volleyball, she reached a milestone with 1,000 career digs. This season in bowling, she tossed a 217 game in match competition although she did have a 226 in practice.
Despite the success, she knows the next level will be more challenging.
“They’re going to be very, very good, so I’m going to have to step up my game. I’ve bowled my best ever this year, but I know I need to start improving more and get ready for college,” said Malone.
“Once this season ends, I’m just going to keep up with it and constantly bowl just to get better because I know I’m going to have the best competition I’ve ever faced in these coming years.”
The ending of different sports has created a bittersweet situation for Malone. Although she likes playing, she hates to see the end of a season.
“It’s been very busy and very emotional. I’m constantly doing something and when I’m not I’m always in here bowling. It’s been emotional because it all just hits me,” said Malone.
“Whenever one sport ends, I start crying. So, I’ve cried a lot. I want to be done with high school, but then again I don’t because I won’t know what to do after high school because I’ve always done stuff.”
Malone plans to major in education and hopes to use her degree to teach and coach.
“I thought about coaching softball because softball has always been my main sport. I certainly don’t want to give that up yet. I don’t know if I’ll coach (while attending) college, but I’ll try to coach once I get out of college,” said Malone.
However, she stopped short of the idea of playing both softball and bowling at Shawnee.
“That would be a lot on me to do with two sports in college, especially because the practices and matches will overlap,” said Malone who then turned her thoughts to Lady Flyers’ coach Chad Cartmell.
“Chad has been the reason I’ve done so well. He’s been a great coach. I owe him a lot for my success and for being in this position. I can’t thank him enough.”

Balanced Vikings get win over Clay