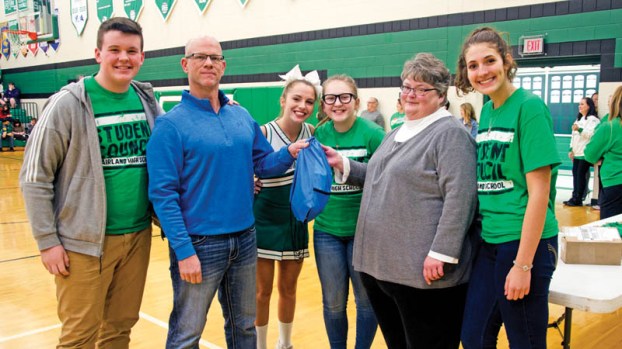 Members of Fairland High School’s student council spearheaded efforts by the school to raise $350 for children in child protective services. On Friday, Teneka Ferguson and Jeremy Leep, of children’s services at the Lawrence County Department of Jobs and Family Services, were on hand at a school pep rally to receive backpacks of items purchased with the funds.

Faculty competes in challenges as result of successful campaign

The main fundraiser in the effort has been a teacher challenge, principal Tessa Leep said.

For each department that raised $50, teachers had to compete in an event at the school’s pep rally on Friday before the game with Chesapeake, with events including a lip sync performance, a sleeping bag race, a basketball challenge and a make-up challenge in which one set of faculty were blindfolded and had to apply cosmetics to others.

It was announced at the pep rally that the school had raised $350 so far for the campaign, which was used to purchase clothes, diapers, wipes and other necessities needed in emergency situations.

The council also presented backpacks to Teneka Ferguson and Jeremy Leep, of children’s services at the Lawrence County Department of Jobs and Family Services, which were filled with several items.

“So many times, when children are taken into protective custody by CPS, there is no time to get necessities and children are left with the clothes on their backs — and, if they are lucky, — a few things thrown into a bag,” Terry Porter, director of Jobs and Family Services, said in a news release. “These backpacks will ensure that every child going through this traumatic experience will have the basic essentials.”

“We truly appreciate this,” Ferguson said. “A lot of times, these children are forgotten.”

Other fundraisers for the effort are planned, including a movie night for kindergarten through fifth grade students on Thursday, as well as a shooting contest at a Fairland High basketball game.

CHILLICOTHE — After a busy day of clearing landslides and rockfalls, crews from the Ohio Department of Transportation’s Lawrence County... read more