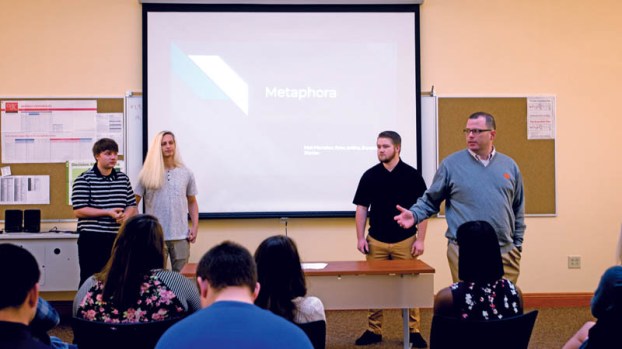 Ironton High School economics teacher introduces the Metaphora team and their concept of a subscription driving service during the Dare to Dream competition on Monday. Teams pitched their product ideas to a panel of judges who then picked two teams to participate in the semi regionals at Shawnee State University on Feb. 28.

It takes a lot to come up with a product that the people want to buy.

For every company like Pepsi, there are dozens of soda companies that have faded into obscurity. For every Google, there is an AskJeeves.com.

But despite the daunting odds, on Monday, five teams of Ironton High School students presented their ideas to a panel of judges in a “Shark Tank”-style competition called Dare to Dream high school pitch competition.

The economic class students had just a few minutes to deliver their highly-detailed pitch to the judges.

There were five concepts including Derma-tergent, a washing detergent for people with sensitive skin; Transitional Window Tint, a car window tint that changes like
transitional tint on glasses; Forget-Me-Knot, a pouch that attaches to a cell phone so when you have someplace to put things like earrings or a retainer; Metaphora, a subscription taxi service; and Favorable Water Fountains, a drinking water fountain that uses a sensor to turn on the fountain instead of a button or foot pedal.

After the presentations, the judges asked questions, mainly how the teams arrived at the cost of their product and manufacturing deals.

Most of the students are seniors in teacher Doug Graham’s economic class.

The judge panel was made up of local business people, including Jay Zornes, Jodi Rowe-Collins, Jerry Rowe and Michael Thompson, who is the chairman of the Dare to Dream project.

Thompson said the project is done in hopes that the students are inspired to become entrepreneurs and start businesses for themselves.

“A lot of them are getting ready to graduate and they are deciding on their career path,” he said. “We realize that, today, one of the options is to be an entrepreneur. They need to have the fundamentals on what it takes to start a business.”

Thompson said the groups at Monday’s Dare to Dream competition were struggling with understanding costs, like how much profit they need to make to support a businesses and pricing out manufacturing costs.

He pointed out that Ohio University Southern has an entrepreneur program.

“Every college is gearing in to and focusing on entrepreneurship,” Thompson said. He added that the Dare to Dream project has seen a couple businesses started in the four years it has been going on.

“Some of the students at other schools are already making money with the ideas that they had, which we love,” he said. “We say in the business of entrepreneurism that the first dollar is the hardest to make. After that, you just replicate what you were doing.”

IHS principal Joe Rowe said the competition was a good way of teaching the students how to sell their ideas and put into action what they learn in the classroom.

“I think this a really good exercise in taking what they are learning in their economics class into actual practice,” he said.

The students, for the most part, weren’t fazed by having to give their presentations.

“We’ve been preparing this for a couple months,” he said. “We felt like we knew what we were talking about for the most part. There are a lot of nerves when people ask questions, but I think we handled it pretty well.”

“We’ve been working on it pretty hard for a couple weeks, working on our slide show, we did surveys,” she said. She added it was a little bit nerve wracking to stand before the judges, but it wasn’t too bad.

“I’ve done things like this my whole life with science fair projects and 4-H projects,” she said.  “So stuff like this is not that big a deal anymore.”

She said that if they go farther along in the competition, they might see about putting their drinking fountain sensors into production.

“We do think it’s a really good idea and it is innovative,” she said.

Isaac Reed with the Derma-tergent project said his team started the day it was assigned in class.

“I think it would be a really helpful product for babies,” he said. “Our hardest part was figuring out the cost, how to compare ours to leading brands. I hope we can make it because there are not a whole lot of sensitive skin detergents out there. Hopefully, we can up our game with that idea.”

Hannah McCarty with the Transitional Window Tint team said they started on the project a few weeks ago.

“It took awhile to get the idea and then put the slides and presentation together,” she said.

“The hardest part was coming up with an idea. But I thought we did well before the judges.”

Abigail Patterson with the Forget-Me-Knot team was the lone junior amongst the presenters.

She said that she presented the idea to her team in October and they are trying to make working prototypes of their pouches for cell phones to sell.

“The hardest part is right now, there is so much trial and error,” she said. “It’s frustrating but we are getting through it. We would love to sell it, that’s why we created a web site. We’re waiting to get the prototypes done so we can put up pictures and sell it online and in our sponsor’s shop.”

They plan on making 60 themselves and then outsource production.

Economics teacher Graham said this is the first year that HIS students have been in the competition and thinks it has helped the students go beyond the textbook.

“I think my students had to be creative, they had to figure out what is needed and then figure out if it is viable and make it come to fruition,” he said. “I think it ties somewhat with so many different aspects, not only economics but team work and presentations.”

He said he is already thinking how he can make next year’s projects better and bigger.

“We had five teams this year. My personal goal would be to expand that to eight to ten teams next year,” Graham said. “Ultimately, I want to get those kids thinking about viable ways to make those projects a reality.”

In the end, there were two winning teams, the Favorable Water Fountains made up of Raegan Crabtree, Ethan Duncan and Erica Collins the Forget-Me-Knot team made up of John Higgins, Hunter Humphreys and Abigail Patterson.

They will go to the semi-finals on Feb. 28 at Shawnee State University in Portsmouth to compete with teams from Ohio and Kentucky.

Dare to Dream is sponsored by Glockner Automotive.