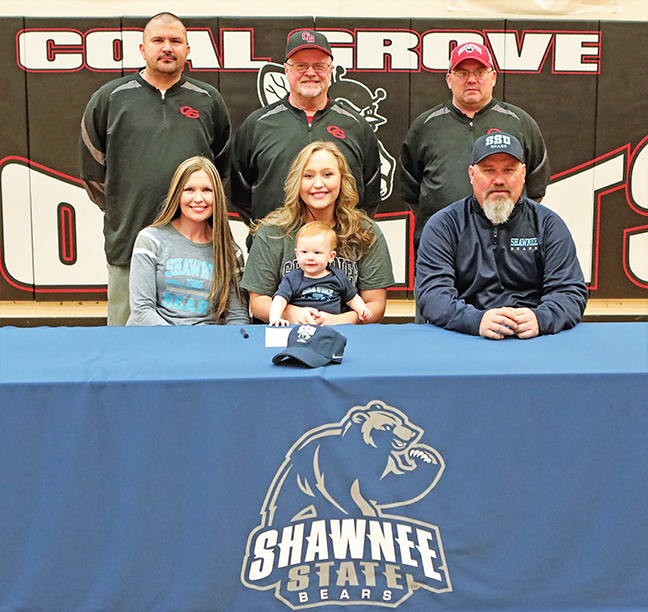 COAL GROVE — They call catcher’s equipment the tools of ignorance.
Well, that’s not the case for someone with the intelligence of Lauren Crum.
The Coal Grove Lady Hornets’ senior softball standout was smart enough to figure out that catching was the position for her at the tender age of 10.
“I started catching because I’ve always been the bigger girl and (coaches) thought I could handle it more than the other girls,” said Crum.
“When I was first a catcher, my uncle (Brandon Daniels) was living with us and we were in the backyard and he pitched — it was probably a 70 mile per hour fastball – to me and I caught it. I was really little. The gear was way too big on me and I could barely see out of my helmet. It knocked me back, but I was like, ‘I think I can be a catcher.’ And I started catching.”
Fast-forward to 2019 and Crum is still catching and will continue to catch in the future after signing a letter-of-intent with the Shawnee State Bears on Thursday.
Crum talked with several schools including Glenville State where she made a visit and received an offer on the spot.
“I was thinking about going there, but my sister just had a baby and they told me I’d only be able to come home like once a month and I really don’t want to miss out on him. Shawnee is close enough my family can come and watch. I just don’t want to be away from home just yet,” she said.
Crum is only one of two seniors this season remaining from the Lady Hornets’ first-ever Ohio Valley Conference championship team.
She said being able to secure her future after high school will benefit her both now and next fall.
“It’s really relieving to get this out of the way because I was always worried about it. Was I good enough to play at the next level? Is anyone interested in me?” said Crum in a self-quiz.
“After getting this out of the way, it’s a big relief. I’ll be able to play my last year of high school worry-free.”
Lady Hornets’ head coach Wayne Kellogg said that having Crum has been a blessing and she brings a lot of leadership to the team.
“She’ll be our leader this year. She’s been an awesome leader for us. She’s a hard worker and she’s a good girl to coach,” said Kellogg.
“This is her fourth year catching. She’ll play some third base. She’s a power hitter. I’ve been fortunate to be here the four years she’s been here. She’ll really do well at Shawnee.”
Getting the chance to play college softball is a dream come true for Crum, something that became a goal right about the time she began to catch.
“Ever since I was really little, that’s always been my dream to play softball in college. I’ve never had my doubt. I’ve always wanted to play in college because I love softball. It’s my favorite sport ever,” said Crum.
The skill package that has made Crum a good high school player is the same skill set that Shawnee State wants.
“They are looking for a power hitter. They told me I could have a chance to play catcher or third base or anywhere,” said Crum. “Not to sound cocky, but I can play any position they want me to except pitcher. Obviously, I have to work for my position, but they said I could play catcher or third.”
Crum plans to major in biology and become a physician’s assistant.
“I like helping people,” said Crum.