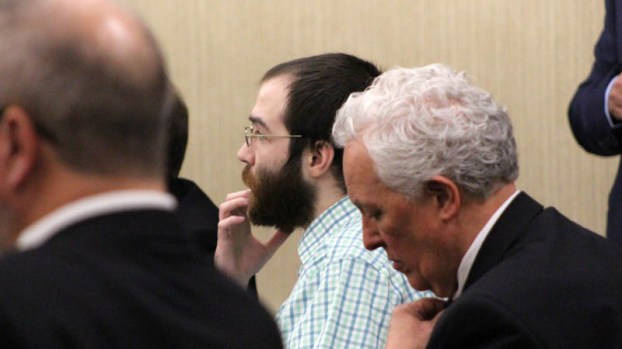 Aaron L. Lawson, 24, left appears in Lawrence County Common Pleas Judge Andy Ballard’s courtroom with Kirk A. McVay, assistant state public defender, Monday, Feb. 11, 2019, for jury selection at a trial alleging a quad murder in Pedro. He later opted to be tried in front of a three-judge panel, with that set to begin on Thursday morning. (Photo courtesy of Courtney Hessler/The Herald-Dispatch)

Two judges have been appointed to the quadruple murder case against Arron Lawson.

On Friday, the Ohio Supreme Court appointed retired Janet Burnside, who was elected to the Cuyahoga County Common Pleas Court in 1991 and retired this year.

Lawson is facing, among many charges, four death penalty cases of aggravated murder for the shooting deaths of husband and wife Donald McGuire, 50, and Tammie L. McGuire, 43, both of 15830 State Route 93, Pedro, Stacey Jackson, 25, and her son, Devin Holston, 8, of 15497 State Route 93, where the slayings occurred in 2017.

Lawson’s trial was to start on Feb. 12 after two weeks of jury selection. But, against the advice of his defense counsel, Kirk McVay, assistant Ohio state public defender, and attorney Gene Meadows, he elected to have his case heard by a panel of three judges instead of trial by jury.

Lawson said that he was originally leaning toward opting for the three-judge panel instead of a trial by jury, until he consulted with his family and defense counsel on Feb. 11.

He said when he saw his mother start to cry, he then chose the trial by jury, only to change his mind again to his original thought the next day when the trial was to start.