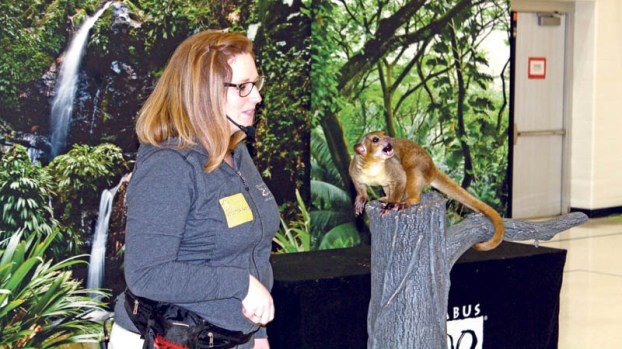 Ellen Stemm, with the Columbus Zoo, shows off a kinkajou to the students at Burlington Elementary School during an event on Wednesday.

BURLINGTON— The students at Burlington Elementary were in for a treat on Wednesday, as the Columbus Zoo had brought several animals to show right in the school’s gymnasium.

Jen Dew, Ellen Stemm and Katie Stevens, from the Columbus Zoo, had with them a plethora of animals that they brought out for the students one by one, teaching a little bit about each along the way.

The first to be brought out was a Prehensile-tailed porcupine, which they noted was very good at climbing and lives in the rainforest.

The next animal that was shown was a box turtle named Myrtle, who they said was 20 years old. The group urged the students that if they see a turtle around, which are common in our area, not to mess with it or touch it, but just to enjoy it with their eyes, adding that they may see the turtle again as the animals’ territory does not usually spread very wide.

Other animals that the zoo had with them were an armadillo, a Prehensile-tailed porcupine, a kinkajou, which they said is most closely related to a raccoon, a Macaw that was able to say its name, an African cheetah, Madagascar hissing cockroaches and a red tail boa snake, which the students were able to touch on their way out.

The Columbus Zoo has visited either Burlington Elementary or South Point Elementary several times over the past four five years.

“A lot of the kids in this area aren’t able to get up to Columbus or don’t have the money to go to the zoo,” Michael Clay, Burlington Elementary principal, said. “This provides an opportunity to learn about these different animals right here at school.”

For more photos from the event, see the Focus section in this weekend’s edition of The Tribune.