Dietrich happy for chance to compete for Reds’ bench role 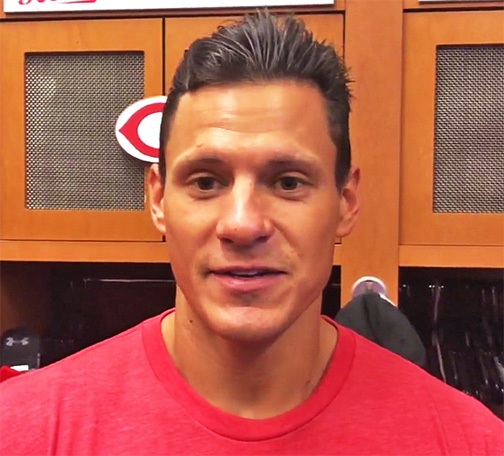 GOODYEAR, Ariz. (AP) — Derek Dietrich didn’t have a team after the Miami Marlins designated him for assignment in November. The utility player has wound up with a team from his home state, getting a chance to earn a role off the bench.
Dietrich agreed to a minor league deal on Tuesday with the Cincinnati Reds, who plan to carry four players on the bench. The 29-year-old Dietrich will get an opportunity to win one of those spots in camp.
His versatility made him attractive to the Reds, who could use another reserve infielder. Dietrich also has played outfield.
“One of his strengths is he can move around. He can play second base. He plays some first base, third base, corner outfield,” manager David Bell said. “I’ve seen him play a lot, but we haven’t mapped out plan for what positions he is going to play. We will move him around enough he’ll be able to adapt.”
Dietrich grew up in the Cleveland area. His grandfather, Steve Demeter, played for the Tigers and the Indians in 1959-60. Cleveland is only a four-hour drive from Cincinnati, which made the opportunity more attractive.
“Maybe I can go home on an off-day,” he said.
Houston drafted him in the third round in 2007 out of St. Ignatius High School in Cleveland, but he chose to play baseball at Georgia Tech. Tampa Bay drafted him in the second round in 2010 and traded him to the Marlins in 2012 for Yunel Escobar. He made his major league debut a year later.
Dietrich appeared in a career-high 149 games last season, batting .265 with a career-high 16 homers and 45 RBIs. He played 97 games in left field, 33 at first base, and split the rest of his time between second base, third base, right field and DH.
“I’ve made a profession being able to play all over the diamond,” he said. “I’m sure that’s how I’m going to be utilized initially here.”
The Reds’ starting infield is set with first baseman Joey Votto, second baseman Scooter Gennett, shortstop Jose Peraza and third baseman Eugenio Suarez. Dietrich is among a group that includes Alex Blandino, Blake Trahan, Christian Colon, Kyle Farmer and Connor Joe competing for bench spots.
As spring training approached and Dietrich didn’t have a job, he wasn’t sure what possibilities would open. He was glad to get an offer from the Reds that includes a $2 million base salary and up to $500,000 in performance bonuses if he makes the major league team. He got $2.9 million with the Marlins last season.
“It was a little unexpected, anytime you go through something new,” Dietrich said. “For me, it was staying ready, being patient and finding the best fit. I’m happy to be here. I’m playing in my home state for the first time.”