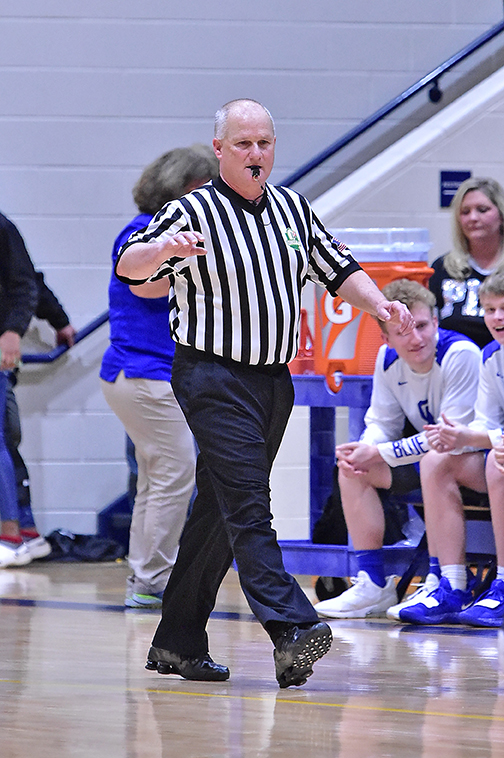 The only thing Mark Michaels plans to do with his referee whistle from now on is to call for his grandchildren to come inside the house.
The 25-year veteran high school basketball official is calling it quits after this season. And the 60-year-old grandfather plans to spend his spare time with his grandchildren.
“I missed a lot with my own kids, but I wouldn’t change it. I’ve always had good support at home,” said Michaels.
After getting married and starting a family, Michaels said he waited until his children were in school before he took officiating classes from instructor and fellow official Lou Peake.
“I knew I wanted to do it. When my youngest got in school, I took the class,” said Michaels.
Early in his career, Michaels worked with Ivan Hanshaw and Mike Hacker and the trio were considered a very good officiation crew. Michaels said it was fun officiating with the two men, but he said the travel to and from games might have been more entertaining.
“When I got on they just went to three-man crews and I got on with Ivan and Mike. They were funny. Just great guys with great stories,” said Michaels.
“But when the game began, I’ve always worked with guys who are focused on the game.”
In recent years, Michaels has worked with Chuck McKnight and Bernie Hensley as well as some others. Being from West Virginia, Michaels was apprehensive at first about working in Ohio.
“I always was from West Virginia and part of the River Cities Chapter. I was so well accepted. I’ve got a lot of friends (in Ohio),” said Michaels.
After working four or five nights a week doing grade school, middle school, high school, boys and girls games, Michaels said it was busy but he would never trade the experience.
No, not even the harassment by coaches and fans.
“I just do the game and go home and I don’t make it public,” said Michaels.
“I don’t really hear the crowd. Sometimes I hear it, but I try not to look in the stands and make eye contact.”
For whatever reasons, Michaels was never awarded a state tournament game although he worked five regional contests. He said his favorite venue was Ohio University.
“The Convo is the greatest setting. It’s a great place to call,” said Michael. “I wanted to do a state game, but I never got close.”
Still, Michaels has nothing but positive thoughts about his career and his future.
“I’ve been blessed. I don’t have any leg trouble. I’ not injured. It’s been a great time,” said Michaels.
And it’s been great for the players and coaches to have had an official like Mark Michaels.