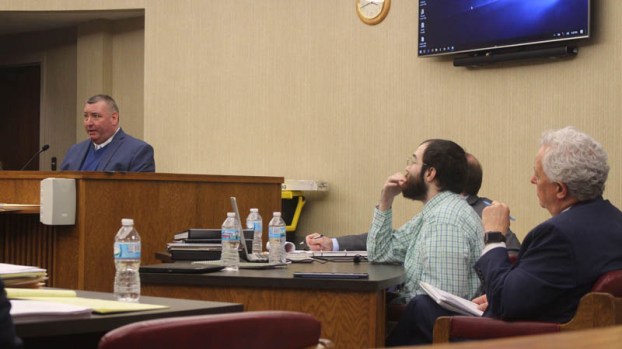 Day two of Arron Lawson’s trial for a 2017 quadruple homicide brought out more details in the case on Friday.

That included the playing of the tape of Lawson, 24, confessing to his crimes in front of Lawrence County Sheriff’s detectives Jason Newman and Sgt. Aaron Bollinger shortly after his capture.

Bollinger took the stand for the playing of the tape, where Lawson detailed what happened on Wednesday, Oct. 11, 2017 at the Holston residence at 15497 State Route 93, as well as the day before and the days following, until he was eventually captured by authorities.

Lawson confirmed the state’s opening argument in the tape and said he went to the Holston residence on Oct. 10, 2017, and wedged a Power Rangers book in a back bedroom window so he was able to sneak in the home the next day. On the tape, Lawson revealed that he and Stacey Holston, 25, had a sexual relationship, which she ended and that made him angry enough to kill her and her family.

Lawson said he knew Todd Holston left for work around 4:30 a.m., and he got to the house around 5 a.m. on Oct. 11, 2017, adding that he did this very quietly and hid behind a Christmas tree until Stacey’s son Devin Holston, 8, went to school at Rock Hill Elementary.

Lawson said on the tape that Stacey went to the bathroom and, when she came out, she went into that back bedroom where Lawson fatally shot her three times in the chest area with a Charles Daly shotgun with camo features, which he used in all four of the slayings. He added that she didn’t say anything to him, and after he shot her, he dragged her body into Devin’s room, placed her on his bed, undressed her and had sex with her. He said he knew 2-year-old Braxton was in the master bedroom, but he didn’t have it in him to harm the toddler, adding that he often babysat Braxton and took care of him.

Lawson said he used a condom to have sex with Stacey, which he then threw away in the kitchen trashcan, and was later recovered as evidence following the interview. He also confirmed that he used Stacey’s cell phone to call Rock Hill Elementary, pretending to be Todd Holston, to make sure Devin would come home on the bus after school. He added he hadn’t previously known Devin was supposed to be going to his grandparents that day.

After he had sex with Stacey’s body, Lawson said he covered her up with what he believed to be a Ninja Turtles blanket.

When Devin arrived home from school, Lawson said he began asking him questions, such as where his mother was and what time his dad was supposed to be home. Lawson added that, at that point, he informed Devin he had brought a PlayStation 3 game system over and put it behind a dresser in Devin’s room. Devin went to go try to find that system, which never existed, and Lawson fatally shot him twice. Devin did not see Stacey’s body in the room, as it was covered with a blanket on the bed. He then proceeded to cover Devin’s body up with clothing and things in the room, making it hard for authorities to originally find the body with the others.

Later, Tammie McGuire, 43, came to the residence to check on Stacey and the family. Lawson fatally shot her twice, once near the back of the neck with the bullet coming out of her mouth and knocked her tongue out, which was later discovered on a countertop in the kitchen area.

Dr. Robert Shott, assistant Montgomery County Coroner in Dayton who performed the autopsies, confirmed during testimony that the tongue was not cut out, but rather that it lined up with where Tammie McGuire was shot and the bullet ejected.

Lawson then dragged Tammie’s body into a room containing a washing machine and dryer.

Tammie’s husband, Donald McGuire, 50, then forced his way into the residence, where he was met by Lawson, who said he fatally shot him twice. Lawson then moved Donald’s body into Devin’s room as well.

On the tape, Lawson said, about 10 or 20 minutes after Donald’s death, Todd Holston returned from work and entered the home. Lawson said he was out of ammunition and resorted to stabbing him multiple times with a small pocketknife. Following being overpowered by Holston, Lawson said Holston kicked him out of the home and he then took the McGuire’s Chevrolet S-10 pickup truck, drove around for a while and then went to Walmart and Taco Bell in South Point.

Lawson later went to a friend’s residence, where he was spotted by deputies, at which point he fled again, crashed the truck and took off on foot into the woods, where a two-day manhunt ensued.
Lawson said that he had a backpack with him at the home containing numerous supplies, including a tarp, ski mask, zip ties, rope, toilet paper and a flashlight, so he was prepared, at least for a little while, after fleeing. He added that when Todd kicked him out of the home, however, he wasn’t able to take the bag with him and it was left in the back bedroom.

Another significant portion of Friday’s proceedings came when Shott took the stand to talk about the four victims’ gunshot wounds.

He went in chronological order, beginning with Stacey and ending with Donald, the last one to be killed. Though he had the shots numbered on each of the victims, Shott said he could not confirm what order the shots took place.

He said that through conducting Stacey’s autopsy, he saw she had three gunshot wounds, with the first going left to right and slightly downward in her chest, adding that there was no exit wound for the first one he numbered. He said the shot damaged three of the four chambers of her heart, with a number of other organs and tissues also damaged. He said this shot, by itself, would have been fatal.

The second shot he examined on her went through her upper chest, left to right, and although it did not hit her heart, it went through both lungs and would have also been a fatal shot by itself.

The third shot went through the back of her right shoulder and fractured some of her ribs that connect to her spinal column. Though he said he couldn’t confirm this would have been a fatal shot by itself, he said it was very likely to be fatal.

Next, he talked about Devin’s autopsy, where he confirmed Devin was shot two times. The first he looked at entered Devin’s right arm, going right to left and front to back slightly downward. The shot severely damaged his shoulder and ribs, with Shott adding that the shot by itself would most likely have been fatal. The next shot he looked at on Devin entered on the right side of his back, going back to front. He added that, though this shot by itself would only potentially be fatal, if it wasn’t, it would have caused a severe injury.

Through examining the body of Tammie McGuire, Shott said he found two entry wounds. One was on the upper backside of her neck that traveled through the spinal cord and out the oral cavity, causing her tongue to discharge from her mouth. He said the tongue was sent separate from the body, but it was consistent with the gunshot wound and had no signs of being cut out of her mouth after the fact. He said this shot was likely fatal, and if it wasn’t, would have been instantly paralyzing. The second shot he examined on her made only one wound, with no entry or exit point found, and went from front to back, but was most likely not fatal by itself.

Finally, after examining Donald, Shott said he found two gunshot wounds, with the first having an entry on his lower chest, going right to left and downward, which caused severe trauma to his heart, liver, esophagus and ended in his left kidney. Shott added that the shot damaged three of his four heart chambers, and would have been fatal by itself. The second shot he examined on Donald entered the backside of his left shoulder, going left to right and downward, which fractured his left shoulder blade and caused severe disruption to soft tissue. Shott said it’s hard to say if this shot by itself would have been fatal right away, but that it had the potential to be over a period of time.

Shott also said he was only able to tell that shots occurred at close range on Devin, due to soot from the gun that was visible on his body, and that the others he wasn’t able to determine.

Day three of the trial is set to begin at 9 a.m. Monday in the courtroom of Lawrence County Common Pleas Judge Andy Ballard.

Lawson went to Walmart, Taco Bell after slayings The suspect in a 2017 quadruple murder pleaded guilty to all 13... read more