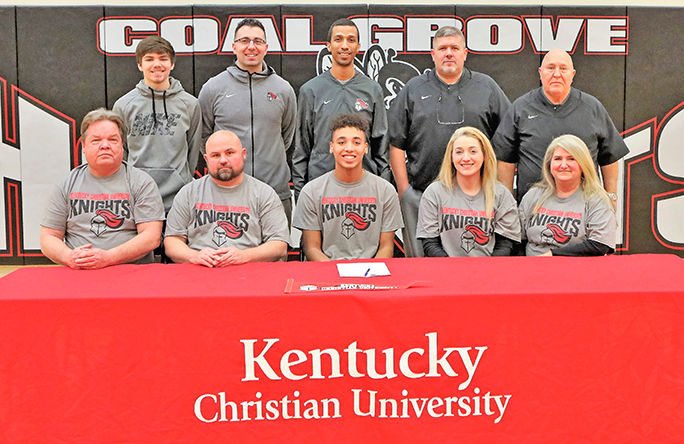 COAL GROVE — “Seasons change and so did I. You need not wonder why.”
Those two lines from the song “No Time” by the Guess Who sum up the development of Coal Grove Hornets’ All-Ohio senior basketball standout Aaron Music.
Back in the third grade, Music signed up to play basketball and admitted there was no immediate success. In fact, it was the opposite.
“I wasn’t very good. I was in the last pick of the draft. It was pretty bad. I worked my way up,” said Music.
Work his way up he did until Friday when he signed up again, only this time it was a letter-of-intent to play for the Kentucky Christian Knights.
Music — a Division VI third team All-Ohio selection as a defensive back in football — actually talked to the University of Pikeville about playing football
“Football was my first love, but over time basketball just became my thing and I just stuck with that. It didn’t feel right (at Pikeville). I visited KCU five times. I wanted to make sure it was the right fit. It felt good for me, so I chose them,” said Music.
There was also a period of climbing the ladder for the Hornets, but that didn’t take nearly as long.
Music worked his way into the Coal Grove starting lineup after about five games in his freshman season.
He hasn’t sat down since.
“He’s a top-notch kid. He’s always in the gym, never complains. His hard work and dedication has meant everything to him,” said Hornets’ head coach Kevin Vanderhoof.
“I think he can play for them right now. He’s a special kid. He’s just been a pleasure. He’ll be successful in whatever he does.”
Vanderhoof isn’t the only one who thinks Music can contribute early, if not right away. That is the thinking of KCU head coach Akeem Scott.
“Aaron just has a high IQ. He has a knack for the game. He’s extremely athletic. He’s been in some big situations,” said KCU coach Akeem Scott.
“We’re going to try and play him at the one (point guard) or two. I’d like to see him play more at the one so he can take more control of the game. He can shoot it. He can handle the ball really well, handle pressure. He’s someone who is looking to step up and handle the challenge as a freshman.”
This past season, the 6-foot-2 Music averaged 17 points, 8.6 rebounds, 3.2 assists and 1.8 steals per game. He helped the Hornets win 19 games last season and reach the regional tournament for only the second time in school history.
This season, Coal Grove is 16-6 and finished 10-4 in the Ohio Valley Conference. It is the second straight season the Hornets have won 10 games in the league.
Music knows that even if he starts from the outset, it won’t be easy.
“I’m going to have to bring my game. It’s a lot faster than high school. I’m just going to have to step up,” he said. “The game’s not that fast or different for me, but it is a little faster. I’m going to have to get used to it.”
The statistics don’t tell the entire story about Music’s game. He has been very unselfish which is something that Scott likes.
“That says a lot about his character. Obviously, he’s an extremely hard worker. Unselfish is something we like to carry over throughout our whole team,” said Scott.
“But he’ll get to shoot the ball plenty of times, I’m sure. Being able to have that kind of a creator for our team is something that we need as well.”
Friday’s signing represented not only a lot of work for Music, but a lot of support at home.
“I just had a determination to work hard and get better every day. My mom (Bethany) really pushed me and so did my dad (Brandon). They pushed me to do what I believe in and go out there and be the best you can be every day,” he said.
Music plans to enter freshman studies.
“I’m going to go in undecided and see what I like best and stick with that,” said Music.

Jim Walker jim.walker@irontontribune.com ROCKSPRINGS — It has been a broken record for the Symmes Valley Vikings this season. In yet... read more