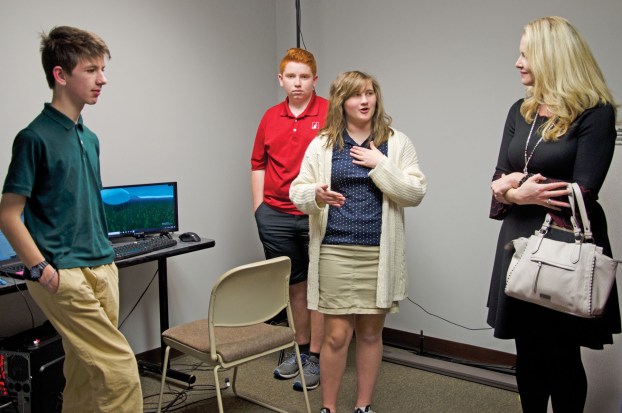 Bryn Stepp, regional representative for Mike DeWine’s office, was in Lawrence County for the Lawrence County Chamber of Commerce Luncheon and followed it up with a visit to the school, located on Solida Road.

Stepp got an overview of programs offered at the public school, which focuses on science, technology, engineering, math and medical programs.
She was joined on the tour by other regional representatives, such as Juli Stephens, field representative of U.S. Rep. Bill Johnson and Ohio Rep. Ryan Smith, R-93.

The school’s new director, Gary Robinson, who has been on the job since January, led them throughout the building, where they saw students engaged in various activities, such as robotics, designing a virtual reality program and taking part in a forensics analysis of a mock crime scene.

Stepp also listened to the presentation of Bella Schraeder, Zane Walter and Tommie McCartney, who were preparing to take part in the Dare to Dream competition with their design of a system to warn distracted walkers using cell phones.

They told her that that the sensor technology is already in existence and that they believe a prototype would be easily feasible.

“I’m duly impressed,” Stepp said of the group, wishing them well on the competition.

She said she found all of the students she interacted with to be knowledgeable and well spoken and said she would be recommending Lt. Gov. Jon Husted visit the school on his next trip through southern Ohio.

The school is preparing for it major fundraiser for the year, with it international dinner and silent auction set for April 11. For more information on tickets, contact the school.

The American Red Cross is asking Game of Thrones fans to bleed#Forthethrone this March. HBO, the producer of the hit... read more