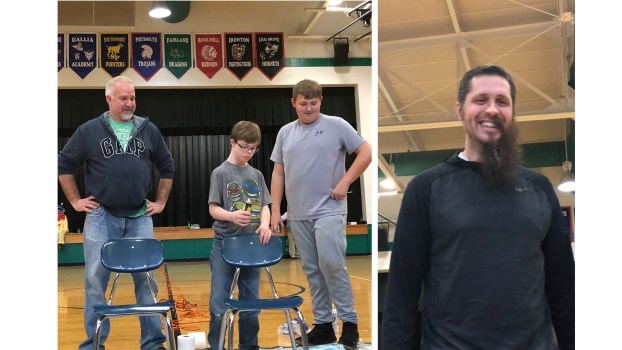 Submitted photos LEFT: The Fairland Middle School Beta Club sponsored a Teacher Challenge Assembly on Friday, as part of a fundraising challenge for the Leukemia and Lymphoma Society. RIGHT: A teacher shaved half of his beard in front of the student body as part of the challenge.

$1,900 raised for Leukemia and Lymphoma Society

ROME TOWNSHIP — The Fairland Middle School Beta Club sponsored a Teacher Challenge Assembly on Friday, as part of a fundraising challenge for the Leukemia and Lymphoma Society.

According to teacher Glenn Dillon, students were challenged to raise $1,500 as a school building. If the students hit that mark, the teachers agreed to perform challenges for the student body.

Each student was given a box and informed that if each student returned with $3.75 after a month of collecting change the school would reach their mark of $1,500. The boxes were due back by Feb. 14. At the end of the fundraiser, the students had returned $1,900.

“This was my first year doing this fundraiser as the new Beta Club Sponsor at Fairland Middle School,” Dillon said. “I knew it was a lofty goal, but I knew that the students would get excited about an assembly such as this one. I also know that we have a lot of people that have battled or lost loved ones by cancer and donating to find a cure was important to them. I am already excited about next year and challenging the students to top what we achieved this year.”