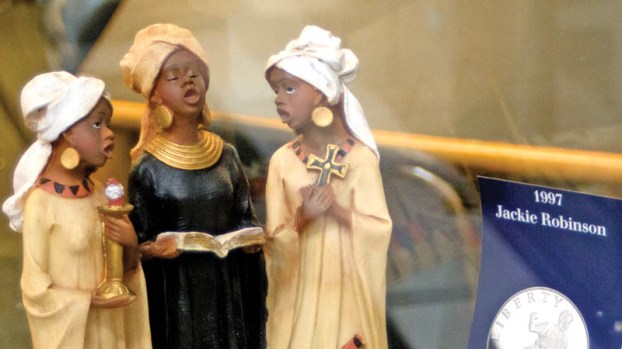 Items from the collection of Suzanne Howard were part of the Black History Month exhibit at Burlington Elementary School’s library during the month of February.

BURLINGTON — Each February, students at Burlington Elementary are greeted by a display to commemorate Black History Month.

The display case at the school’s entrance contains items on loan from Suzanne Howard to mark the observance.

Librarian Harriet Ramsey said Howard offers the pieces from her collection each year.

This year’s exhibit included small sculptures and figures, along with books on black history and figures such as former President Barack Obama and athletes like Shaquille O’Neal and Jackie Robinson.

In the past, Howard, a South Point schools graduate, has contributed items such as dolls, commemorative stamps and other pieces for the month.

Seniors in Lawrence County who participate in the congregate dining service at the Park Avenue Apartments in Ironton and the... read more