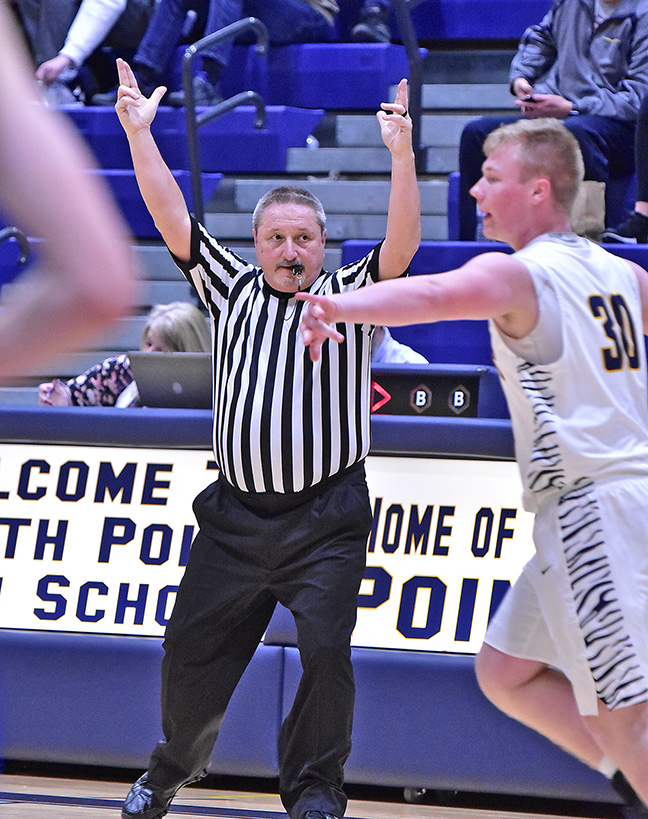 TIME OUT!
Bernie Hensley is taking the time out instead of signaling for one at a coach’s request.
The 38-year veteran high school official for five sports, Hensley will take a much-deserved break in June when he is inducted into the Ohio High School Officials Association Hall of Fame.
Hensley is one of 14 officials who will be inducted during ceremonies at the Hall of Fame banquet scheduled for June 15 in Columbus.
Hensley goes from one sport to the next without catching his breath. During his career, he has officiated football, basketball, baseball, softball and volleyball.
Only one other official being inducted — Robert Juliano of Eaton — has work the same five sports.
“I knew last year I had been nominated, but I didn’t get it the first time through. It’s tough. I don’t know the procedures. You have to be voted in. I was the first one the Southeast district this year,” said Hensley.
“They sent me a letter and it was exciting to read. It put a smile on my face. After all those years, it’s a great honor. To be voted on by your own peers. To get tournament games (is an honor) and this is like icing on the cake and ice cream. I feel humble about it. I’m the first one from the Ironton area since Joe (Swarts) got selected.”
Swarts was elected to the Hall of Fame in 1999.
Hensley has officiated football for 38 years, basketball for 37, baseball and softball 34 and volleyball 22.
The numbers on Hensley’s resume are as long as his years of service.
He has worked five state championship and four semifinal games in football. He has a state title game in girls’ basketball (2009) and a boys’ state semifinal basketball game (2008) along with 10 state championship and semifinal games in girls’ softball including a title game last spring.
As for baseball, he has four state championship and three semifinal games.
And just for good measure, Hensley was presented the Ironton Chapter’s Joe Swarts Lifetime Achievement Award given to a member in memory of Swarts and in recognition for years of dedication and service in basketball.
Whew!
Hensley said there was no real reason for becoming an official except for his love of athletics and wanting to find a way to stay involved.
“Just a love of sports. As far as athletics, I just enjoy playing sports and being around it and watching it. I really can’t put my finger on it. One day I just decided to go to Marshall and take a class. I took football first,” said Henlsley.
“I just liked staying involved with the kids and meeting people, enjoying that. I just wanted to stay active. I can’t say I like one over the other. It was football at first and then I just missed doing something between sports. I just liked being part of the game and staying young. I don’t know. I keep getting older and the kids keep staying the same age.”
Hensley said it was hard to pick one game being more special than another, but the one he does remember officiating was in 2002 when Waverly played at Northwest as the two head coaches agreed to let senior Jake Porter carry the ball on the final play of the game.
Porter suffered from Chromosomal Fragile-X and couldn’t be tackled. Waverly had the game well in hand when a timeout was called.
“Jake was a special needs student. He couldn’t be tackled or hit. They put him in all week long and practiced taking a knee. That’s when they called a timeout. Waverly coach (Derek DeWitt) and (Northwest coach) Dave Franz got together and Derek said, ‘let him take it to the house,’” said Hensley.
“They gave him the ball and he started to take a knee and they said ‘run,’ and he ran up the middle and it opened up like the parting of the Red Sea and he took it right in. I remember him spiking the ball. It was a rare game with the stands on both sides applauding for letting it happen. It was a neat thing.”
Hensley said his first year of varsity he worked with a West Virginia crew in small towns such as Williamson, Crum and Fort Gay.
“Now they’re all consolidated,” he said.
Hensley said this first two state championship games were memorable from an emotional standpoint.
“Not one overturns the others. Probably the first (title game) stands out. It was a Division Six game. It was special. When I did a Division One, it was a packed house in Canton. It was pretty exciting,” said Hensley.
The officials honored are selected by the OHSAA Officials Hall of Fame Committee.
“It’s an honor to have an Officials Hall of Fame where the best in Ohio are recognized for their outstanding careers and their dedication to officiating,” said Beau Rugg, OHSAA senior director of officiating and sports management who also happens to be a member of the Hall of Fame.
“Officiating is a service to student-athletes, coaches, schools and other officials and it is a joy to recognize these highly-respected individuals into the Hall of Fame. We thank all officials for their service.”
Hensley’s work hasn’t been restricted to on the field. He is currently the Ironton Chapter secretary in football, basketball, baseball and softball.
He has set with the committee of the Basketball Association organizing a youth basketball tournament held toward the end of the season in which member officials referee games for free and proceeds for the tournament go toward two scholarships — one male and one female.
OK, time in. Back to work, Bernie.