Pannell off and running to Shawnee State 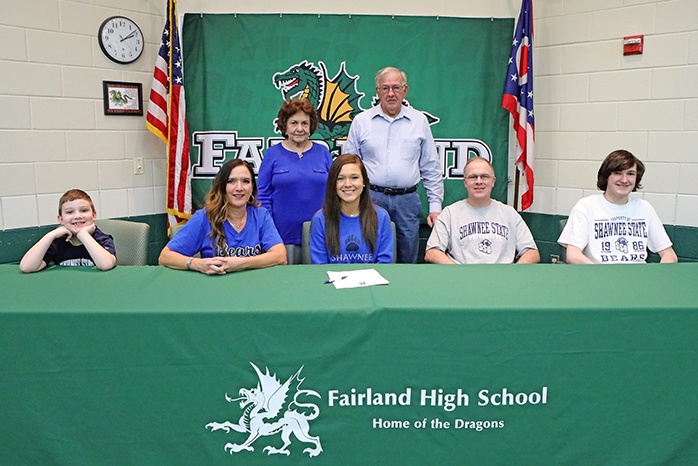 PROCTORVILLE — After running away from the competition the past six years, McKenna Pannell is running straight toward a bigger challenge.
After finishing among the top of the leaderboard during her high school career, the Fairland Lady Dragons’ senior distance runner will now get a chance to compete against even better competition after signing a letter-of-intent with the Shawnee State Bears on Monday.
Running became part of Pannell’s lifestyle six years ago as a sprinter on the seventh-grade track team.
“I switched to distance and I did volleyball and cross country my eighth-grade year,” said Pannell. “I really started focusing on (running) going into high school.
“Sprinting helps me because I can do some of the mid-distance races, but I wasn’t a very good sprinter. I’m much better at distance I guess.”
As a distance runner, Pannell puts in a lot of work as she runs between 35 to 40 miles a week.
“I thought it would actually be more. I always imagined cross country races being six miles but they’re only three,” she said.
Pannell will run cross country and both indoor and outdoor track for the Bears and veteran head coach Eric Putnam.
“(Putnam) told me how the training will be and he’ll send me a schedule on stuff for the summer so that I can transition,” said Pannell.
Pannell posted her best 5K time of 19:47 this past season and ran a 20:17.8 at the state cross country meet where she placed 55th in a field of 177 runners.
“It was awesome,” Pannell said of the state meet experience.
“I set (the state meet) as one of my goals going into the season. I was hurt my sophomore year, so it really set me back. To come back senior year and be better than I was, it was just like all my hard work paid off. It was a dream come true.”
Pannell won the Ohio Valley Conference individual title, was third in the district meet and 11th in the regionals.
As for track, she is the current school record holder in the 1600 meters with a 5:32 clocking.
“She’s special. Since winter of 2018 her last year has been really good. She’s been running well. She had a big PR (personal record) last spring in track and that carried over into the fall and placed high in the state (in cross country). She’s just had a good senior year,” said Putnam.
Besides Shawnee State, Pannell entertained others schools such as Marshall, Kentucky Christian, Marietta and Charleston. Pannell said Shawnee became the obvious choice.
“It just seemed like a really great fit for me and I already know a lot of runners who have gone up there and they’ve all loved it. So, after talking to them and going on a visit, it just seemed right for me,” she said.
Pannell is deciding to major between either occupational therapy or biomedical science.
“They have a really great program in occupational therapy where you can get your Masters in five years,” said Pannell.
Putnam said the educational factors were helpful in landing Pannell who has been on the Bears’ radar.
“She’s somebody we’ve had an eye on for a long time. Academically, she’s interested in some things Shawnee is good at and that is the most important thing. Having said that, the talent we have is probably the perfect fit for her running-wise because she doesn’t have to be the number one man,” said Putnam.
“We have some pretty good runners returning, but if she can come in there and get between three and five for us, that’s going to make us better than we already are. That’s kind of what we’re hoping.”
Pannell enjoys doing many things in her spare time such as 4-H and community service with her church. But she said cross country holds a special spot in her schedule.
“I like the social aspects of it. I have a lot of great teammates and friends I’ve made through it. Once you’re in shape, it’s not really bad,” Pannell said.
Of course, participating in extra-curricular activities involves more than just Pannell. She said it has been made possible to success thanks to her family.
“My parents and grandparents have always supported me, being at all my meets and just helped me through when I was hurt and just supported me to keep running,” said Pannell who is a relative of the legendary Native American Pocahontas.
“I’m related to Pocahontas. My grandma has the papers on it. She traced our ancestry back to her,” said Pannell.