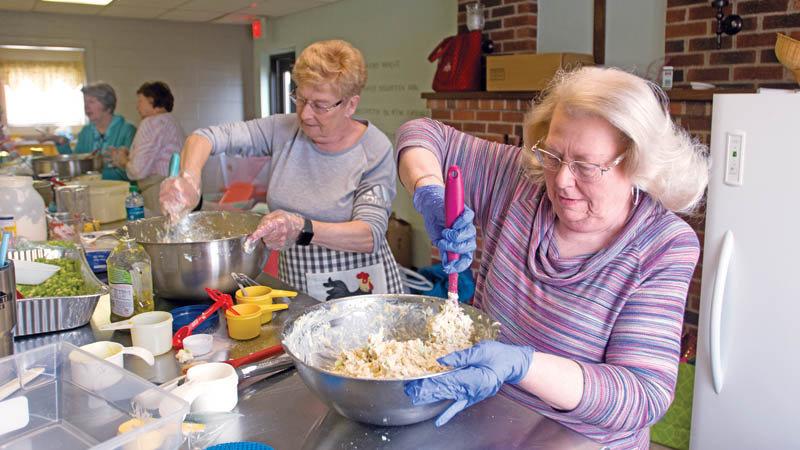 The Child Welfare Club spent the better part of Wednesday preparing for one of its most popular events — the spring take-out luncheon, which features their popular chicken salad on a croissant.

The chicken salad croissant sandwiches and sides were made on Wednesday and will be delivered today to the people and businesses that put in orders.

“We are delivering over 600 meals,” said club member Pat Wiseman. She added the club’s next event will be the spring salad luncheon on April 11. “Those are our two big spring fundraisers.”

The two events used to be just a single event but the demand, and the workload, was too much for a single day.

“It got so large we had to split it into the take-out and the salad luncheon,” Wiseman said.

When asked why the chicken salad sandwich sale was so popular, Child Welfare Club president Jane Davis had a simple explanation.

Wiseman said that everything is homemade, except for the croissants.

“We bake the cakes, we bake the chickens, we make the cranberry salad,” she said.

The Child Welfare Club was founded in 1918 when times were tough in Ironton. The club started as a way to make sure that area children had basics like milk.

Over the past 100 years, the club expanded its mission to do more, but all their works are geared toward helping children. Now, they raise funds to contribute to things like Secret Santa, Sue’s Kids, Harvest for the Hungry, Backpack Buddies, the City Mission, Tools for Schools and scholarships at Ohio University Southern and Collins Career Technical Center.