LaFon steps down as Ironton coach 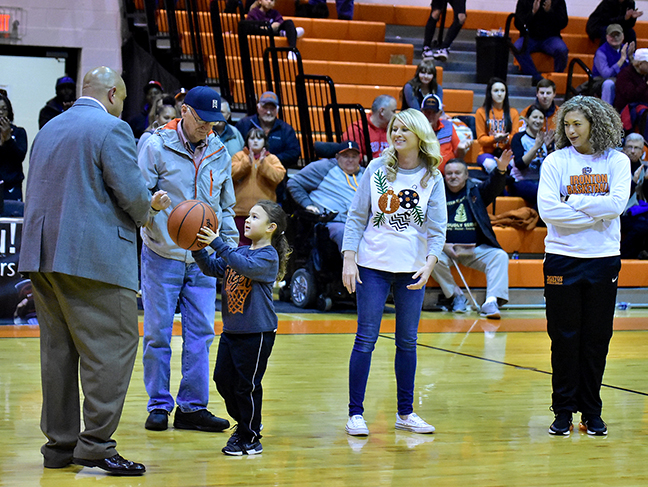 Ironton Fighting Tigers’ boys’ basketball coach Mark LaFon — who is stepping down as head coach — receives the game ball from his daughter Avery following a 59-47 win over Ashland, Ky., on Dec. 22, 2018, that gave him his 300th career victory. Looking on are LaFon’s father, John, his wife, Angie, and daughter, Samantha. (Kent Sanborn of Southern Ohio Sports Photos)

Mark LaFon is stepping aside from coaching to do some watching.
The 14-year Ironton boys’ basketball coach plans to resign in order to open up his schedule to watch his daughter, Samantha, play basketball as well as other sports.
LaFon informed his players on Monday that he would not be coaching them next season.
Samantha is a sophomore who plays volleyball and basketball. LaFon said that his practices and games sometimes conflict with her games.
“I want to watch my girl play,” LaFon said.
He added that he will be able to spend more time with his wife, Angie, and their pre-school age daughter Avery.
Ironton finished this past season 18-7 and won the Division III sectional while finishing second in the Ohio Valley Conference.
LaFon also recorded his 300th career victory in 26 total seasons. He is 315-250 overall that includes a 52-52 record in six seasons as the Chesapeake girls’ basketball coach, 53-72 in six seasons as the South Point boys’ coach and 210-126 at Ironton.
His best season was 23-3 when Ironton reached the Division III state semifinals only to lose to eventual state champion Ottawa-Glandorf 61-60 in overtime.
LaFon is expected to remain as athletic director and didn’t rule out the possibility that he would return to coach in the future.
“I want to coach right now. This is making a decision on a bigger level,” he said.
There is no timetable on hiring a replacement.