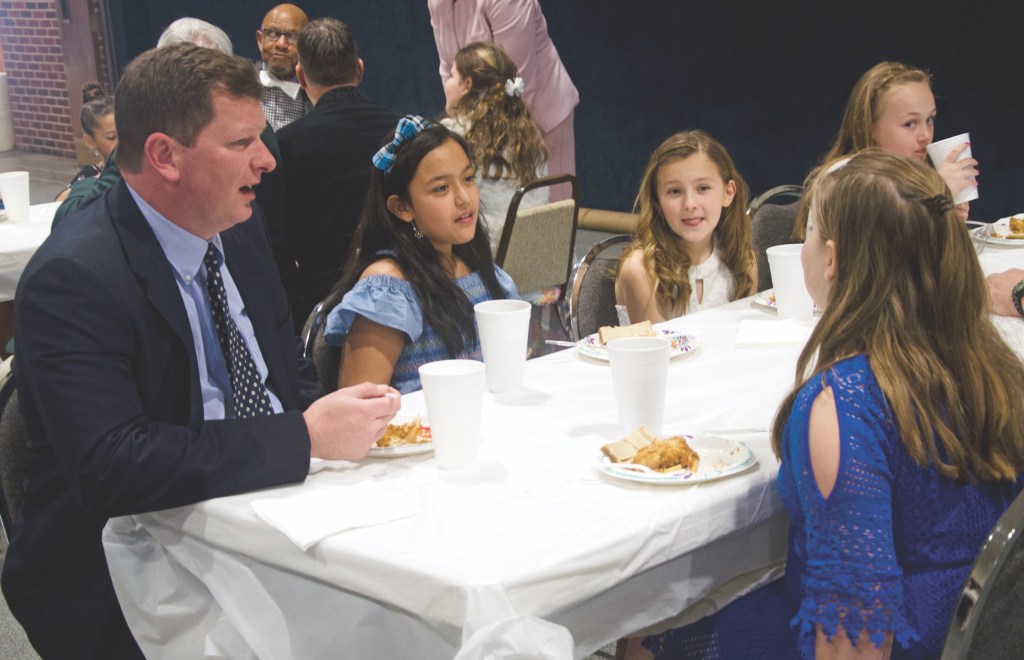 On Thursday, the 25 members of Ironton Elementary’s Ladies Academy gathered at the First Nazarene Church as the final part of their course in social and other skills.

The goal was to be confident in a social setting as they ate lunch with men from the community such as elected officials, first responders and others.

Haley Shamblin, a prevention specialist with Impact Prevention, helped run the academy and teach many needed life skills such as confidence, etiquette, sewing, basic car maintenance, cooking and how to use tools.

With the Ladies Academy at an end for the year, Shamblin said they all did outstanding.

“They gained confidence, they gained some new skills and, hopefully, gained a community of women that they can turn to when they need something,” she said. “Many of them are already using their new skills.”

One example of that was fourth grader Catherine Benicker, who said she took the course to become a better person in life.

She showed off where she had, all by herself, sewn a strap back on to her purse. It was a skill she had learned a week earlier.

“I couldn’t do that before I took academy,” she said.

She said the favorite thing she learned was how to change oil in a car.

“It was fun,” Benicker said. “I thought it was just fun. Changing the tire was fun too, because you got to see how they do it.”

One of the men who dressed up for the occasion was Lawrence County Auditor Jason Stephens. He sat at a table with the students and discussed everything from Spongebob Squarepants to who had a boyfriend and who didn’t.

He said he enjoyed it because it was a different perspective for him, since he had three sons and no daughters.

“I was invited and it is always fun to hang out with kids, you never know what you’re going to get when you meet kids,” he said. “I told them, even though I’m a dad, it is still fun to meet new people and learn a little about them. We’ve had a good time talking. I am impressed with all the skills they learned.”

IES Assistant Principal David Ashworth came up with the Gentleman’s Academy program three years ago. The Ladies Academy was started the next year because of demand for similar program for the female elementary students.

Last year, the Ladies Academy had 50 students. This year, it was reduced to just 25 students because the sheer number of people made it hard to fit into classrooms and giver everyone equal attention.

He said, as winter approached, students began asking when academies were going to start up.

“This year, we had to restrict it to fourth grade class level and had students write an essay on why they wanted to be in the class,” he said. “We just couldn’t handle 50 kids in the cooking and automotive classes.”

Ashworth said he was happy with the community supporting the academies. There were high schoolers that helped in the cooking and automotive classes, members of the Child Welfare Club showed students how to sew and others helped in many ways.

“I couldn’t imagine another community in America that does it any better than the way Ironton does it,” he said. “Whenever I need something from the high school, Principal Joe Rowe always says yes. The pastors in the community have been very supportive. The first responders, the mayor’s office, the county offices always say ‘Yes, we will do it.’ And they go out of their way to help take care of it.”

During the Ladies Academy luncheon, two members of the Gentlemen’s Academy presented a certificate to the Child Welfare Club for their continued help in teaching students how to sew.