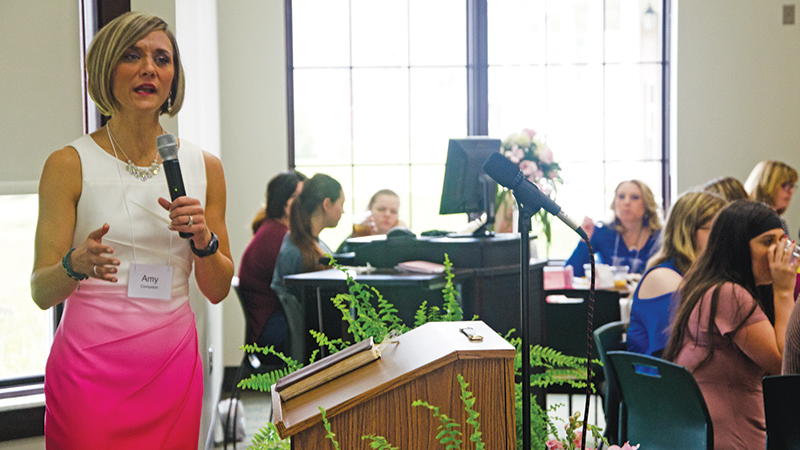 Amy Compston, of Ashland, Kentucky, the missionary behind Amy for Africa, delivers the keynote address for the 8th annual Women’s Conference at Ohio University Southern’s Proctorville Center on Friday.

PROCTORVILLE — For eight years, Oho University Southern’s Proctorville Center has served as host for the Women’s Conference, which drew about 170 attendees on Friday.

Kristi Barnes, as associate professor of psychology with the school and coordinator for the event, said this year’s event had a wide array of topics for its workshops and breakout sessions.

“We’ve always had a pretty diverse program,” she said. “We’re well-balanced and have more sessions that reflect creative themes.”

This year’s sessions included County Commissioner DeAnna Holliday, who spoke about the clean-up efforts of Project First Impression, Sarah Diamond Burroway, of Ohio University Southern, who discussed the works of women writers from Appalachia, and Nichole Webb, MA, LPC, who talked about mindfulness.

Barnes said the wellness sessions “showcased the importance of the whole person.”

This year’s keynote speaker was Amy Compston, of Ashland, a marathon runner and missionary, who shared her story of overcoming drug addiction to launching her efforts to bring Christian schools to Uganda.

Compston said she began drinking and using drugs as a teen and this continued into adulthood.

She said two trips to intensive care, followed by an auto accident that nearly killed her, did not deter her.

It was only after meeting a pastor who taught a class in Master Life Planning that she really began to understand her Christian faith.

“I realized how much I was loved by God,” she said.

Compston, who had been running marathons for years, then began to channel that into her new mission.

“I wanted to run for those kids,” she said of those in Uganda, most of whom are unable to attend school.

She said they set a goal to have her running sponsored, hoping to raise $10,000.

“Our God is an awesome God and he’s got great plans,” Compston said of the success.

More workshops followed the keynote luncheon, including one with the equine program form Ohio University Southern.

“As soon as you see him, you feel good,” she said. “We just facilitate him. He works the magic.”

“We really appreciate people volunteering their time and sharing their stories with us,” Barnes said. “And without our community sponsors, this wouldn’t be possible.”