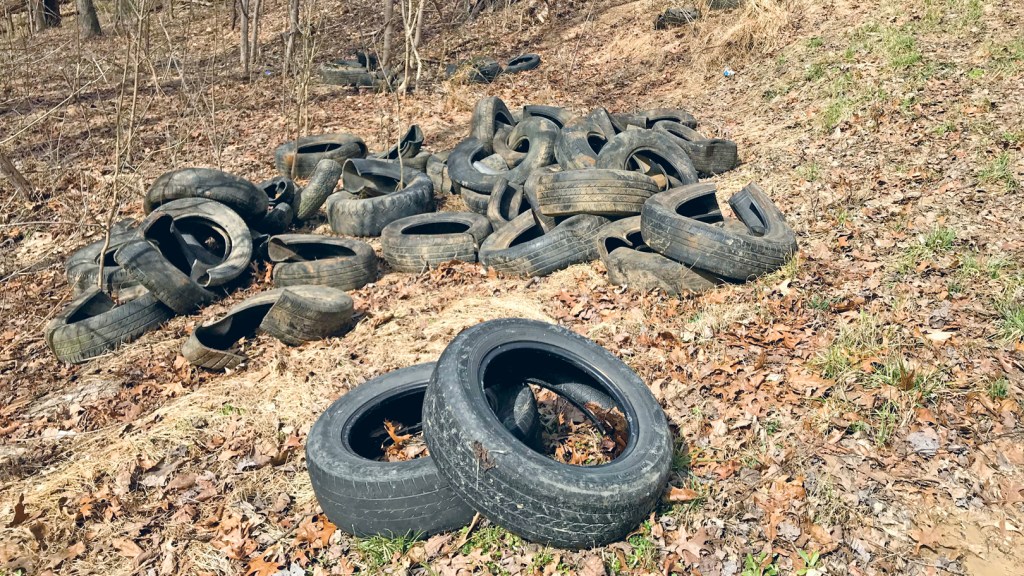 Submitted The Lawrence-Scioto Solid Waste Management District is seeking whoever has been illegally dumping hundreds of tires in Fayette Township in the past few weeks and is asking the public to call with information about illegal dumping.

In the past few weeks, the agency has been getting reports of tires being dumped in various locations on county and township roads. The threadbare tires had been cut off rims.

Dan Palmer, the executive director of the Lawrence-Scioto Solid Waste Management District, said they were concerned that the tires were being dumped by a business and talked to tire shops in Lawrence County and Greenup County.

“We checked all their paperwork to see where the tires were coming from and all the tires they take off vehicles are going to Dalton Tires for proper recycling,” he said, adding that the rims are being recycled at Taylor Metal in Huntington, West Virginia.

But after investigation, one question remained.

“Who is dumping tires in our county,” Palmer asked.

Since they don’t know, they are asking the public for help.

“We are asking more people to be more aware,” Palmer said. “If you see someone dumping tires, get a description of the vehicle, get the plate number, get a picture on your cell phone and give us a call. We need to stop this.”

The phone number for the solid waste district is 740-532-1231. If it is after business hours, Palmer said to call the sheriff’s office to report the dumping.

“Calls can be made anonymously,” he said. “We need public input on this if we are going to address this serious issue.”

The solid waste district has been getting help from the state to clean up sites where tires have been dumped in Lawrence County.

From October to January, crews from the Ohio EPA removed 7,312 tires from 14 locations.

“We’ve been lucky to get so much help from the Ohio EPA,” Palmer said. “This program, called the No Fault Program, doesn’t cost the district a penny nor the county.”

The Ohio EPA did 54 such clean ups across the state, with 14 of those in Lawrence County.

Palmer said he asked the Ohio EPA which of the 88 counties in the state was the worst county.

“We were told, without a doubt, that Lawrence County is the dirtiest,” Palmer said. “Isn’t that atrocious? It is shocking but it is true.”

He said that the agency is pursuing charges against anyone they find that is doing illegal dumping, whether its tires or trash.

And it can be more costly than taking it to be properly disposed of.

“Meaning, you can get between two and four years in the state penitentiary and/or a $10,000 to $25,000 fine,” he said. “So this is serious. Ohio has become very strict on littering, opening dumping, open burning and dumping of scrap tires.”