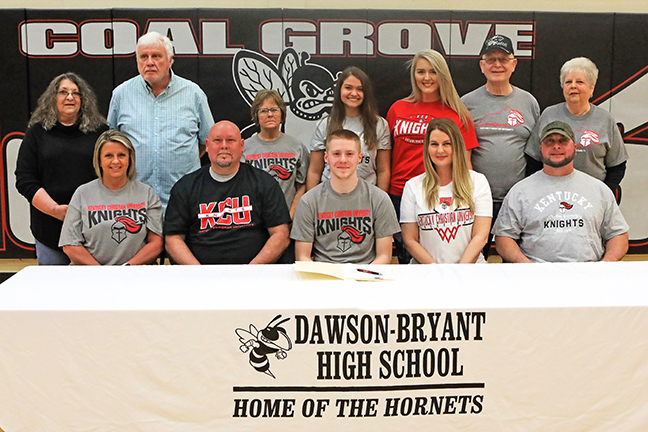 COAL GROVE — There was an old AT&T telephone commercial in the 1980s with the slogan, “Reach Out And Touch Someone.”
Coal Grove Hornets senior point guard Jaylen McKenzie reached out and touched the coaching staff of the Kentucky Christian Knights and it proved to be quite a connection.
After the two parties got together, McKenzie made the right call as he signed a letter-of-intent Friday to play for the Knights.
“I was not in talk with any other schools, just KCU. I reached out to them and they were very supportive getting me into the program. They told me what I needed to do to be part of the program,” said McKenzie.
The 5-foot-11 McKenzie average almost 10 points a game with 3.6 rebounds, 3.0 assists and 1.5 steals a game from his point guard position.
The senior guard knows his strengths and he knows what aspects of his game need to be strengthened.
“I need to get in the gym and work on my game every chance I get and work on my game. I’ve got to put up some shots. I see the floor really well and I’ll use that to my strength and see where it takes me,” said McKenzie.
Knights’ head coach Akeem Scott said McKenzie was a perfect fit on their recruiting checklist.
“We were looking for some depth and some guys we can develop. We’ve talked about some different areas, even possibly a red-shirt type deal with him to develop him some more so we can have another guard ready to come in the following year,” said Scott.
By signing with KCU, McKenzie will join fellow Coal Grove teammate Aaron Music who signed with the Knights earlier this year.
Scott said that McKenzie caught their eye while recruiting Music.
“Watching Aaron brought a lot of attention, but not only that, but it was having a head on the snake deal and that’s what Jaylen was able to bring to the table. Just the leadership, the work ethic. Everything just seemed like a great fit,” said Scott.
McKenzie was an All-Ohio Valley Conference selections and was special mention on the Associated Press sports writers’ Division IV All-Southeast District team.
McKenzie is ready to do whatever it takes to be part of the KCU program and to earn his playing time. While other players bring offense as their main weapon, McKenzie brings a much-needed defensive approach.
“(Scott) actually told me that he had heard I have a pretty good defense and I just told him that’s what I really focused on from middle school on up. I’m really quick on my feet and I can move and I can take a charge for the team,” said McKenzie.
Besides seeing the floor and getting the ball to the open man on offense, McKenzie became known for ability to draw charges against opponents on the defensive end.
“Coming into this year, I wanted to set the school record for charges (taken). I didn’t know what the was, but I’m sure I was close to it. That’s what I’m going to do at KCU. I’m going to play my heart out and play defense just like I’ve been doing and see how many charges and steals I can get,” said McKenzie.
McKenzie plans to major in sports management.