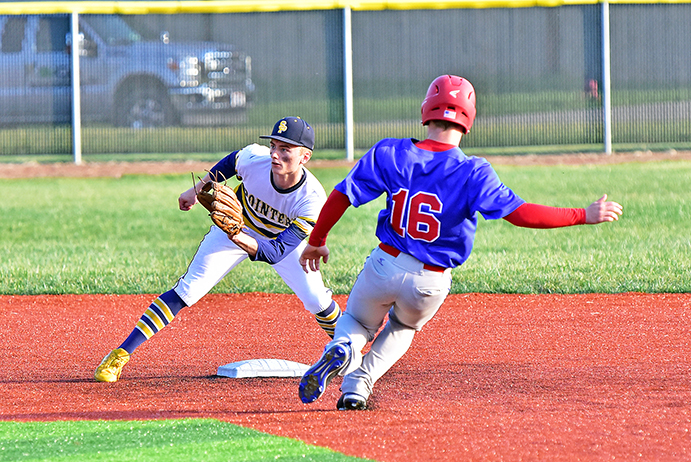 SOUTH POINT — Clutch pitching. Clutch hitting. Clutch win.
The South Point Pointers got the job done in the clutch as they beat the Portsmouth Trojans 3-1 in an Ohio Valley Conference game on Wednesday.
“The bottom of our order came through for us,” said Pointers’ coach Larry Goodwin.
“Brycen McCann, Drew Smith and Brody Blackwell all pitched well.”
South Point (5-4, 2-2) got a run in the bottom of the first inning when Drew Smith singled, stole second and third and scored on Brody Blackwell’s ground out.
Portsmouth tied the game in the fourth.
Drew Rowe got a bunt single, took second on a balk and scored on Danny Lattimore’s base hit.
South Point came back with two runs in the bottom of the inning for what proved to be the winning runs.
Nakian Dawson singled, Zach Cline walked and Brendon Dillon belted a clutch two-run double to centerfield.
The Pointers used some clutch relief pitching to preserve the win.
Portsmouth got two runners on in the fifth and Smith came on to get the side out.
The Trojans loaded the basses with two outs in the sixth and Blackwell was called on to relieve and got a ground out to end the inning.
Blackwell struck out the side in the seventh to record the save.
Brycen McCann worked the first 4.1 innings to get the win. He struck out eight and walked three.
Portsmouth 000 100 0 = 1 5 1
South Point 100 200 x = 2 5 3
Daewin Spence and xxxxx. Brycen McCann, Drew Smith (5), Brody Blackwell (6) and Drake McClure. W-McCann (IP-4.1, H-4, ER-1, K-8, BB-3). Smith (IP-1.1, H-1, K-1, BB-2). Save-Blackwell (IP-1.1, K-3). L-Spence (ER-3, K-6, BB-5). Hitting-PHS: Caeleb McGraw 2-4, Williams Sturgill 1-2, Drew Rowe 1-3, Danny Lattimore 1-3 rbi; SP: Drew Smith 1-3, Nakian Dawson 1-3, Zach Cline 1-1, Brendon Dillon 2B 2-rbi.