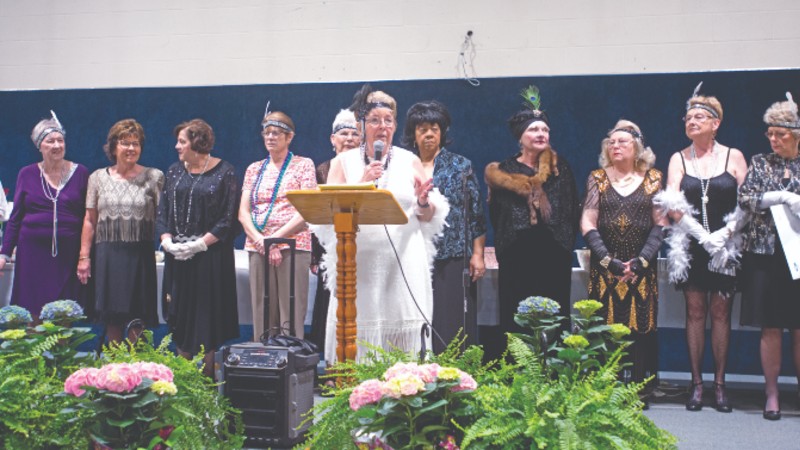 They were dressed in 1920s flapper outfits of black dresses, clunky jewelry and glittering headbands adorned with a feather. The outfits were part of skits to celebrate the club’s 100-year anniversary. So, the ladies were dressed to perform the Charleston, since the club long ago had a fundraiser in which they taught people how to dance.

“Everything we have done today was to celebrate our anniversary,” explained club president Jane Davis to the 110 guests and 30 members assembled at the Ironton First Church of the Nazarene.

She said she got a call from the church that there was mail for them.

“My husband and I thought it was someone needing help and that was the only way they knew how to reach us,” she said.

Turns out it was not a letter from someone in need but rather a proclamation from the Ohio Senate congratulating the group on the occasion of their centennial anniversary and the exceptional amount of work the members had done over the past 10 decades.

“Clearly the club’s impressive contributions to the community really explain what is held in high esteem,” she read from the proclamation. “All those associated with the club, including the president Jane Davis, are to be commended for the foresight, through dedication and selfless devotion of time, energy and ability, far beyond of what is required or expected.”

The group was formed on Valentine’s Day in 1919 and their first mission was to make sure that all the children in Ironton got milk everyday. They continued that until the federal government started a milk program in schools in the 1970s.

Davis said looking back at all the projects the club has done makes her and the members proud.