Drug take back event a success 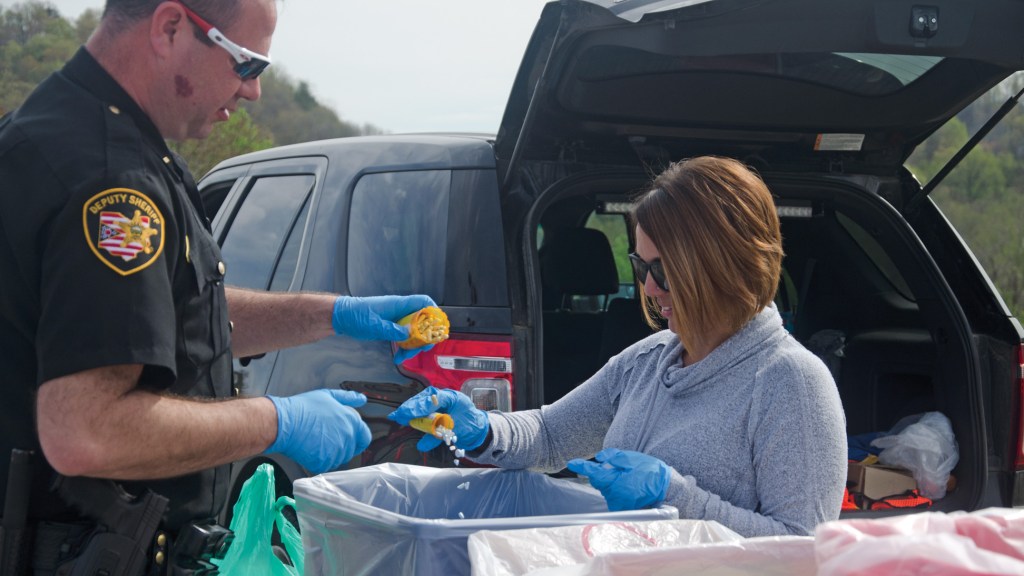 The Tribune/Heath Harrison Members of the Lawrence-Scioto County Solid Waste Management District and the Lawrence County Sheriff’s Department dispose of medications dropped off during the drug takeback event at The Hills shopping center on Saturday.

Collected 78 pounds of pills on Saturday

Saturday was a busy day for the Lawrence-Scioto Solid Waste Management District. It had its annual drug take back day event in Lawrence County and took in pounds of unwanted prescription medication.

“We were very busy,” said Dan Palmer, LSSWD’s executive director. “We started at 10 a.m. and only took about 10 minutes for lunch because we had so much stuff come in. I didn’t think we were ever going to get out of there.”

The final results for the take back at the Ironton Hills Plaza location was 78 pounds of pills, 30 pounds of sharps and syringes and 48 pounds of liquid medication collected from 34 cars.

In tying in with the LSSWD event, the Lawrence County Municipal Court collected four pounds of pills and the mayor and the police chief of South Point took in 29 pounds of pills and 10 pounds of liquid medication. They then took the items to the Ironton Hills location for disposal.

“We did very well,” Palmer said. “I was very pleased with what we took in.”

“We’re going to take what we collect and drive it down to them,” he said, adding that they had been busy in the first 10 minutes since opening, with six cars having already stopped by.

Palmer thanked Our Lady of Bellefonte Hospital for providing the containers for the sharps and syringes and then properly disposing of those items after the collection was over. The pills were taken to OSCO Industries in Portsmouth to be incinerated.

Scioto County had its drug take back event on Friday and took in 30 pounds of pills, 50 pounds of sharps and syringes and 40 pounds of liquid medication from 28 vehicles.

Palmer said he was glad to see that many medications disposed of in the proper way rather than being flushed down the toilet and getting into the area’s water supply.

Among the pills collected were hydrocodone, oxycodone, tramadol, Valium, lisinopril, nitroglycerin and Viagra.

“I want to applaud the people taking advantage of this,” he said. “Hopefully, the message is getting out not to flush these down the toilets, because it all gets in our water systems.”

He said a study of the Ohio River from Pittsburg to Paducah, Kentucky showed an “amazing amount of medications that were detectable in the water samples they took.”

He said the study found medications for blood pressure and diabetes in water.

“I think we are providing a good program here,” Palmer said.