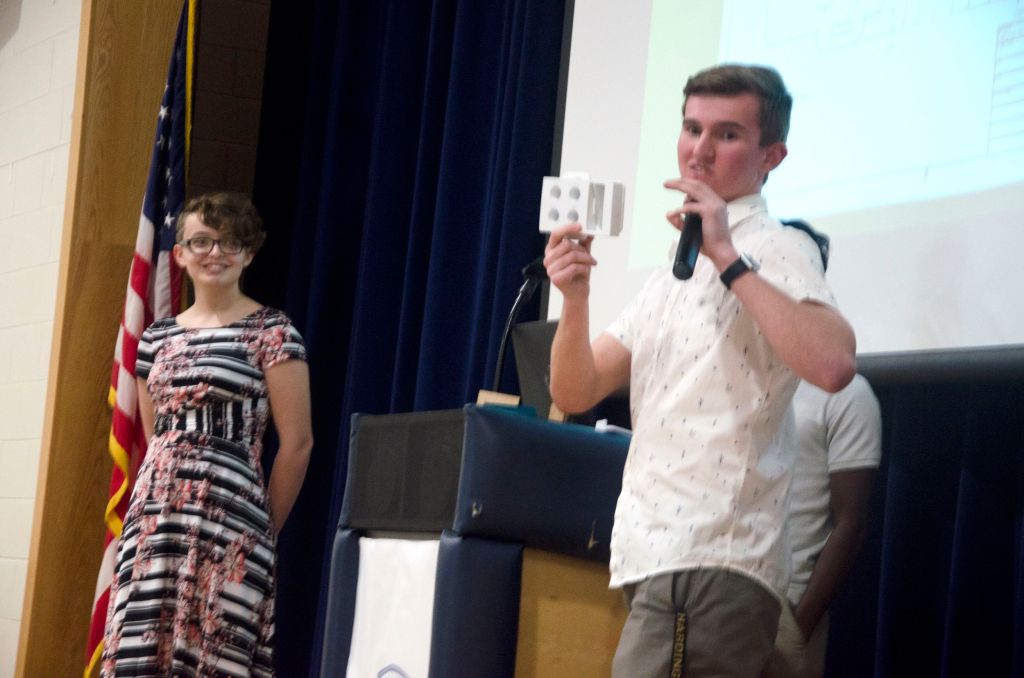 (The Tribune/Heath Harrison) A team of engineering students from Chesapeake High School speak about a project they are working on with Blue Ink Tech in Huntington.

Lawrence County students graduating from the Project Lead the Way STEM program through Collins Career Technical Center were honored on Tuesday night with a dinner at South Point High School.

“We have 82 here tonight,” Gary Salyer, the transition coordinator for PLTW, said. “We have 39 in biomed and 43 in engineering.”

PLTW offers a four-year STEM education in six of the county’s seven school districts. Matt Monteville, satellite director for the program, said all of the schools were represented Tuesday night, except for Symmes Valley, which added the program in 2017 and does not have PLTW seniors yet.

The students will take part in graduation ceremonies at their individual high schools and the event at South Point gave the program a chance to honor them and to present them with cords for graduation.

“We’d like to congratulate the seniors for a journey that started four years ago,” Monteville said. “It was not the path of least resistance.”

Monteville pointed out that many of the students who began the program with them were not present Tuesday, having switched back to regular classes.

“But you are different,” he said. “You challenged yourself and chose hard work and it says a lot about your character.”

“This isn’t taught in any curriculum,” he said. “But what we do is use the engineering and biomed curriculum to put them in tough situations and we say ‘You figure it out.’”

Before the students walked for graduation, the room heard about two such projects that demonstrate these skills.

Ironton High School senior Kylie Hopper, along with biomed instructor Sarah Humphreys, spoke about a water testing project they will be part of this summer.

Working with Ironton juniors Bela Delawder and Lexie Payne, they will be going around the city of Ironton and testing water at older residences for copper and lead.

As they explained, the project arose after they had tested local water samples and found negative positives for coliform, a bacteria whose presence in drinking water can indicate the presence of disease-causing organisms.

After touring the city’s filtration plant, they learned that most water issues arise on the homeowner’s end, due to aging pipes and they agreed to collaborate with the city on the testing over the summer break.

Two teams of engineering students from Chesapeake High School spoke of a project they are doing with Blue Ink Tech, a company based in Huntington.

“They provide service for semis,” Salyer said of the company, explaining that the company provides sensors for each wheel of the trucks.

“When a driver gets in the truck, they can use an app to check the pressure on the tires,” he said.

Salyer said that the sensors have to be “woken up” with a puff of air when installed, which registers a code.

“But they have to do this one at a time,” he said.

The students were tasked with designing a solution to allow multiple sensors to be woken up at one time.

“Our students developed a prototype and model for multiple sensors at one time,” he said. “There’s quite a bit of digital electronics involved.”

The two groups showed the room their designs and explained that the company will choose which one they think best suits their needs.

Salyers said the program will continue to work with the students beyond graduation, helping them on the path to employment.

“I’ll continue to talk to graduates until their first job,” he said, noting there are 285 the program stays in contact with. “I’ll be calling every one of these kids to see if they’re in school and if there’s anything we can do to help.”

Monteville said the graduates all had promising paths lined up.

“Almost every one has enrolled in post secondary education and the college of their choice,” he said.