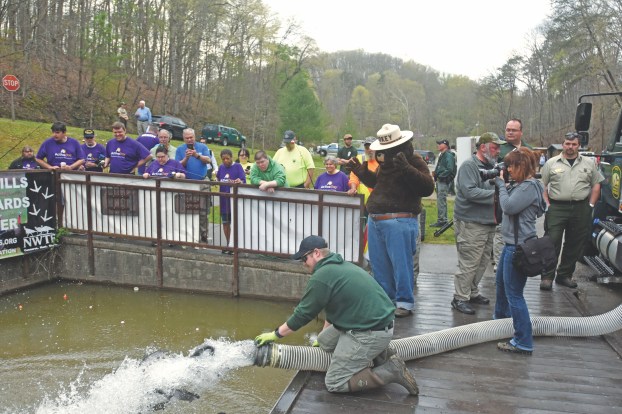 (The Tribune/Mark Shaffer) Smokey the Bear watches as 5,000 rainbow trout were added to Lake Vesuvius by workers from the Ohio Division of Wildlife's Kincaid Fish Hatchery during Thursday's Wheelin' Sportsmen event. The event is put on locally by the South Hills Longbeards Chapter of the National Wild Turkey Federation.

EDRO — “This is what it’s about,” said Chris Sammons as a woman pulled a rainbow trout out of Lake Vesuvius on Thursday morning.

Sammons, the coordinator for the 17th annual Wheelin’ Sportsmen event, was looking over the couple hundred people who lined the boardwalk and a woman started screaming with joy as she pulled a rainbow trout out of the lake in Wayne National Forest.

“She will be talking about this for years,” he said. “This is why we put on this event, to get people out into the woods and enjoy nature and make memories like that.”

The event was begun by the National Wild Turkey Federation (NWTF) as a national event to help the disabled enjoy getting outdoors. The WNF event was put on by the South Hills Longbeards Chapter of NWTF.

Sammons said it was important for people like him who have to use wheelchairs to get into the woods without help. Sammons was wheeling around the event in his own motorized all-terrain wheelchair that had rubber tracks like a tank to get around. He said before he got the Action Track, he had to use an ATV but, “those aren’t allowed here at the fishing area.”

“Someone with a regular wheelchair or a walking disability, they just aren’t able to get out,” Sammons said. “So, we provide them an opportunity to get out at least once a year and enjoy the outdoors.”

As is usually the case for the event, there was sporadic rain, although that didn’t stop anyone from casting their lines.

But as Lawrence County Commissioner DeAnna Holliday pointed out in her remarks to the crowd, “the rain makes for better fishing.”

Also helping the fishing was a large truck from the Ohio Division of Wildlife’s Kincaid Fish Hatchery that pumped a whole school of fish into the lake.

Tim Slone, the district ranger for the Ironton Ranger District, said around 5,000 rainbow trout were pumped into Lake Vesuvius.

“It’s a lot of fish,” he said, adding the rangers were happy to host the event. “It’s a perfect situation for both us and the NWTF. It’s an event for those with physical challenges to get out into the great outdoors. So, it is a great event for all involved.”

The lead organizations for this year’s Wheelin’ Sportsmen event included the Wayne National Forest, South Hills Longbeards Chapter of the NWTF, Ohio Department of Natural Resources – Division of Wildlife and City National Bank. There was help from other organizations including students from Collins Career Technical Center’s forensics programs and the Symmes Valley Lady Vikings softball team.

PEDRO — The Lawrence County Commission voted on Thursday to request information from the county auditor so that two levies... read more