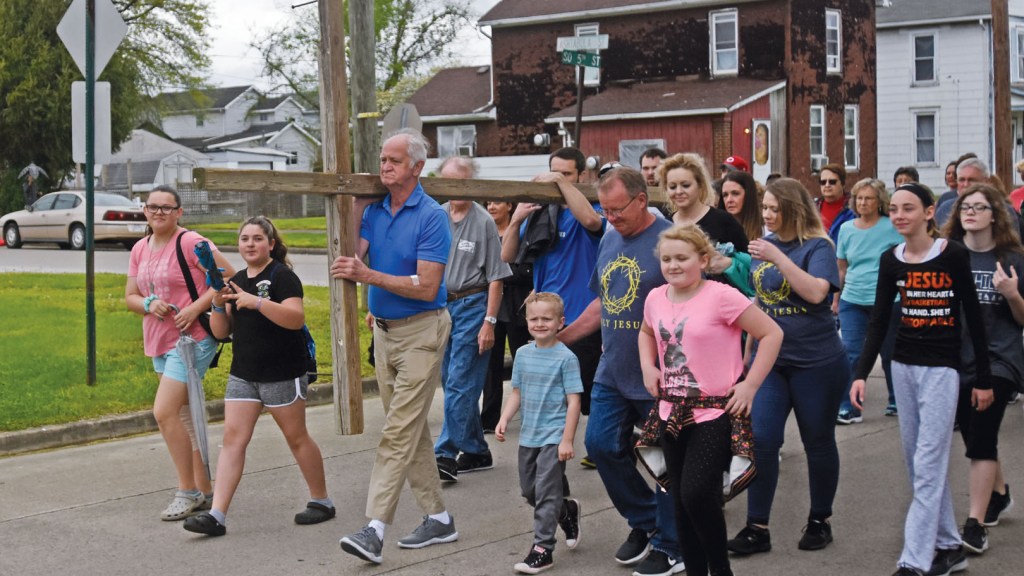 The Tribune/Mark Shaffer ABOVE AND BELOW, members of the Sharon Baptist Church march on S. Fifth Street in Ironton as part of their annual Good Friday Cross Walk as Marvin Bishop carries the cross to the Woodland Cemetery on Friday.

As part of their Easter celebration, some 50 members of Sharon Baptist Church in Ironton held their annual Good Friday Cross Walk on Friday starting at noon.

Pastor Steve Harvey said he guessed that they have been doing the Cross Walk for close to 25 years now.
As is the tradition, they started at the church on Fifth Street and walked all the way to Woodland Cemetery where they put the cross up.

Although it threatened to rain on the walkers, it held off.

“It was better than last year. It was so hot I thought everyone was going to have IVs in their arms because of the sun,” Harvey said.

The pastor said that they do the walk to re-enact “just a little bit” of what Jesus Christ went through on his way to Calvary.

“Obviously, we could never do it exactly with the arrest, the scourging and being put on the cross to die,” Harvey said. “But just to carry the cross and to feel the burden of that, we try to simulate that just a little bit in believer’s lives.”

He said the second purpose of the Cross Walk is to “help grow people’s faith up just a little bit.”

Members of the church switch off carrying the cross as the cover the route to the cemetery, which includes a very steep hill.

“You start up that hill, you need some fresh legs,” Harvey said. “It is an amazing thing to make that journey, it really is.”

Once the walkers get to the cemetery, there are more members of Sharon Baptist Church are waiting.

“We usually have between 150-200 people,” Harvey said. “There are usually a bunch of people waiting for us in cars. They can’t make the walk but they still want to be part of the service.”

Harvey said that the message remains the same.

“Today is Friday, but Sunday is coming,” he said.