Browning connects with Marietta for his college football career 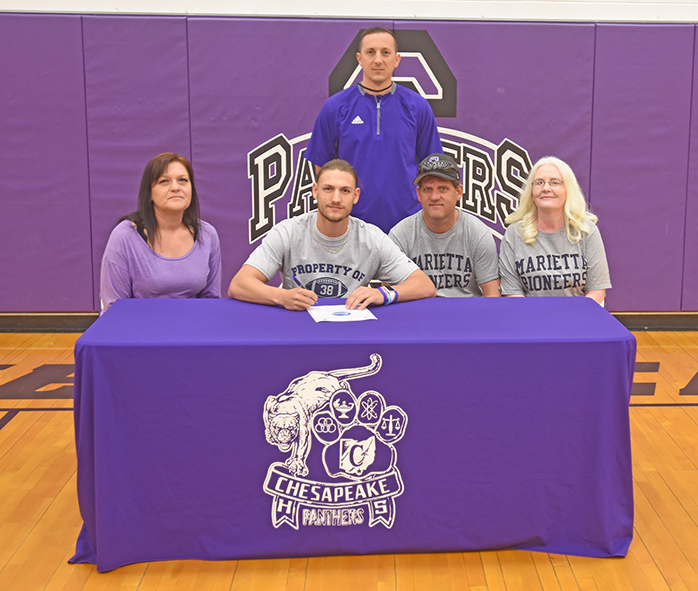 CHESAPEAKE — Austin Browning looked over his college choices must like he would checking down from one receiver to another.
And, just like finding the open player and connecting, Browning found the right place to play college football and connected by signing a letter-of-intent with the NCAA Division III Marietta Pioneers.
Browning looked at Thomas More College, Alderson-Broaddus, Wilmington and Pikeville before settling on the Pioneers.
“Pikeville was my second choice and then Thomas More,” said Browning who picked Marietta because of the opportunity to play quarterback.
“I’ve watched them play a couple of times. They said they’d give me a shot. They already their starting quarterback and I’m going to try and prove something and try and win the top depth chart ranking.”
Browning is a 6-foot-1, 185-pound senior who has been a two-time first team All-Ohio Valley Conference selection as well as a two-time Division V Southeast Ohio All-District first team pick and a two-time All-Ohio team member.
Panthers’ head coach Andy Clark has no doubt that Browning can play for Marietta and have an impact on the program.
“He’s kind of been the go-to guy the past few years for us. He’s one of the better running quarterbacks and one of the better athletes — period — that I’ve coached in my 16 years as an assistant and head coach,” said Clark.
“I hate to see him go on and move to the next level, but I’m glad he’s got the opportunity to do that.”
Browning hopes he can be that duel threat quarterback for Marietta, but he’s willing to play another position if the situation dictates.
“I’m going to try and go for quarterback and if I’m low on the depth chart, I’m going to try and go to wide receiver and learn the routes and then try and get back and play quarterback,” said Browning.
Another key selling point for Browning was the similarity between the atmosphere at Chesapeake and Marietta.
“I like their home feeling. In high school, everybody knows you there. At Marietta, it’s the same thing but you’re in college. It just feels like a home there,” he said.
Besides football, Browning has played baseball and basketball. But he began playing football at the age of five and his love for the game continues.
“It’s always drawn me back. I like being a leader and being on the team and helping each other out. That’s why I’ve always gone back to it,” said Browning.
Although he played safety more of his career, Browning played some linebacker early in his senior season. But coach Andy Clark was concerned about Browning getting hurt which was something the team could ill-afford.
“He didn’t want to keep me there because it was all jam-packed,” said Browning.
Playing defense was fine with Browning, especially in high school where players are needed to go both ways. But he admits his heart lies with the quarterback position.
“Quarterback has always been a thing with me. I’ve always liked to have the ball in my hands at all times. I feel more comfortable with it. If I have to change positions, that’s the big thing I’m going to have to learn about,” said Browning.
Throughout his career, Browning has had to deal with injuries that have cost him a couple of games each season. Although it was frustrating, Browning said he never lost the desire to continue playing.
“Almost every year I keep get injured and I think, ‘why do I keep putting myself into this?’ But then coach Clark and the staff just bring me back,” he said.
Browning plans to major in Biology and pursue a degree in nursing school.